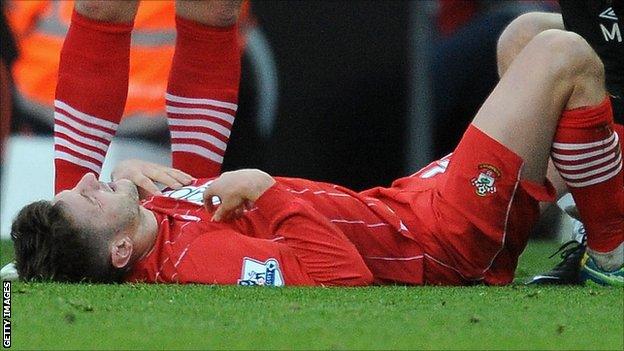 The 24-year-old, who will miss the visit of Sunderland to St Mary's on Saturday, injured his knee during the first half of their 1-0 victory at home to Reading earlier this month.

"We are keeping our cards close to our chest," Adkins told BBC Radio Solent.

Like all teams, you are going to suffer from injuries at certain stages, it is how well you can deal with it

"We're just going to say he is out for Sunderland and you can ask me the next question ahead of the next game."

But the Saints boss was more forthcoming when it came to attacking midfielder Lallana's importance to the team.

"He is obviously the captain of the team, an instrumental character," Adkins said.

"He has got in the England set-up this season but we've got other players as well.

"Gaston Ramirez played there ever so well there when we played Reading, but we've got several players that can play in that position as well.

"Like all teams, you are going to suffer from injuries at certain stages, it is how well you can deal with it.

"I believe we have got several very good players that can play in offensive positions, especially where Adam plays."