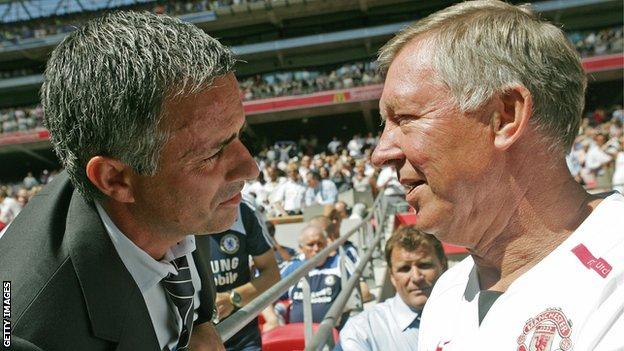 It has been one of the game's most fascinating duels ever since Jose Mourinho swaggered into Sir Alex Ferguson's life in February 2004.

When the brooding Portuguese upstart marked Porto's shock Champions League victory over Manchester United with a celebratory dance down the Old Trafford touchline and that infamous punch of the air, Ferguson must have known he was dealing with someone very different.

Everything about these men says it should be the most bitter of all managerial rivalries. Mourinho, with his ubiquitous Armani overcoat, 5 o'clock shadow and pantomime posturing, appears to stand for everything Ferguson doesn't.

Yet despite marked differences in backgrounds, political beliefs, age and even their football philosophies, Mourinho and Ferguson are far more likely to be exchanging jovial text messages and wine than insults or barbs in the run-up to February's mouth-watering Champions League last-16 tie.

Just a fortnight ago, the pair shared tea at the Lowry Hotel in Manchester as Mourinho's Real Madrid passed through town to play City in the Champions League.

"We will get two wonderful ties but my first thoughts were about the managers. Both of them have had enormous success and achieved so much in the game.

"It goes back to 2004 when Porto met Manchester United at Old Trafford and Mourinho celebrated that goal with a slide on his knees down the touchline.

"Sir Alex Ferguson will have been thinking 'hello, who's this?' back then, but there is a genuine respect between these men. Both will believe they can win, but whatever happens it is going to be fascinating to see two of the game's great characters going head to head once again."

It is the most mouth-watering confrontation that the Champions League could have thrown up: Mourinho the arch-strategist against Ferguson the motivator, the inspiration, the driving force. Mourinho the itinerant whose three-year spell at Chelsea was the longest of his career, versus Ferguson the builder of an empire.

It hasn't always been plain sailing, however. Least of all when Ferguson first sat down in Mourinho's office at Stamford Bridge in August 2004. The 1-0 defeat was bad enough but the cheap bottle of Argentine Shiraz that Mourinho uncorked lived longer in Ferguson's memory. It was not a mistake Mourinho would make again.

They even fell out briefly in the final weeks of the 2006-07 season when Ferguson took exception to Mourinho's claim that Cristiano Ronaldo had "no education" but when they renew acquaintances at the Bernabeu on 13 February there will be a warm handshake before the Real manager will again address Ferguson as "boss".

It has been a fascinating dynamic in this relationship that Mourinho has always shown deference to Ferguson. While the United manager enjoys the respect and reverence that comes his way, he will need no reminding of his poor record in head-to-head meetings against the Portuguese enigma.

Dating back to Mourinho's time at Porto, they have met 14 times as opposing managers, with United winning twice. Few of those encounters have been eye-catching - least of all the 2007 FA Cup final, in which Didier Drogba scored the only goal for Chelsea in the final minutes of extra time.

But Mourinho cares little for aesthetics. Attrition has often been the name of the game when it comes to this rivalry; few teams were better at that than his Chelsea side, built around the strength of players such as John Terry, Claude Makelele and Didier Drogba.

The side that won Inter's first European Cup in 45 years was based on the same blueprint. Real also know how to grind out results but, in Cristiano Ronaldo, Mourinho has the most effervescent of attacking talents and one Ferguson knows all too well.

With the La Liga title already apparently out of reach, the Champions League is everything for Real this season. Defeat in the last 16 might even cost Mourinho his job.

Which brings us to the other element in all of this. For some time now there have been reports that the self-anointed "Special One" would like to fill the void when Ferguson retires.

In reality, that choice would seem at odds with the Old Trafford philosophy of free-flowing football, as laid down by Ferguson and the late Sir Matt Busby. But Mourinho would certainly merit consideration - particularly if he can win another Champions League this year, knocking out United en route.

"There have been the rumours for a long time that Mourinho has been waiting for Sir Alex to retire. We will have to wait and see but it just adds another element to this whole dynamic," Taylor added.

Whatever the outcome, the victor will enjoy the finest of bottles of wine in the aftermath.

For if there is one thing that Mourinho has learnt over the years, only the best satisfies the man he calls boss.