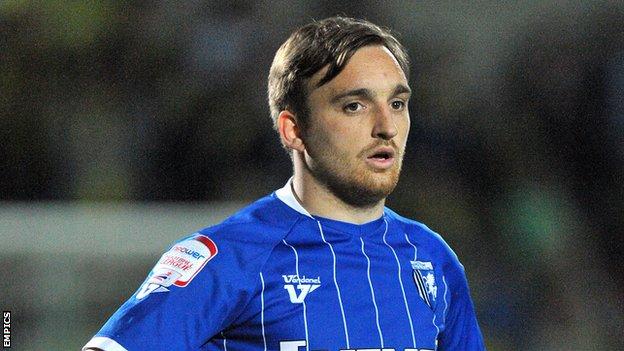 Gillingham midfielder Charlie Lee is confident the side can go on and secure promotion from League Two.

The Gills are five points clear at the top of the table heading into the festive programme.

Lee told BBC Radio Kent: "This season we have knuckled down straight away and we are doing all the right things.

"The way we started was unbelievable and we have kept it up. It is a big gap at this time and we are really confident we can get promoted."

Over the summer Martin Allen replaced Andy Hessenthaler as manager at Priestfield.

The Kent club missed out on the play-off places in each of the last two seasons and Lee, who joined the club from Peterborough last summer, admits the side under-performed last season.

We have been the best team in the league in this half of the season. We've got to go into all the games with confidence

"When I signed last year I thought we had enough to get promoted," the 25-year-old added.

"We didn't gel quickly enough and made a lot of mistakes.

"As players we didn't quite perform. It took me until January before I started performing.

"I had a good second half of the season but apart from that it wasn't great."

But Lee believes the forthcoming fixtures in 2013 are favourable for his side.

"I looked at the table the other day and I think we have got to play seven of the bottom eight at home," he said.

"We've gone out and played the teams that are fighting at the bottom, which are normally hard games, and we've picked up results.

"Playing bottom teams at home is a lot easier, especially with the crowds we've been having.

"We have been the best team in the league in this half of the season. We've got to go into all the games with confidence."

Lee is one of four Gillingham players that have accumulated four bookings this season, meaning one more yellow card before 31 December would see him receiving a one-match ban.

"We have got a lot of strength in depth and I don't think anyone is really worried," Lee said.

"If anyone gets suspended although it will be a loss, there is someone raring to come in and play."