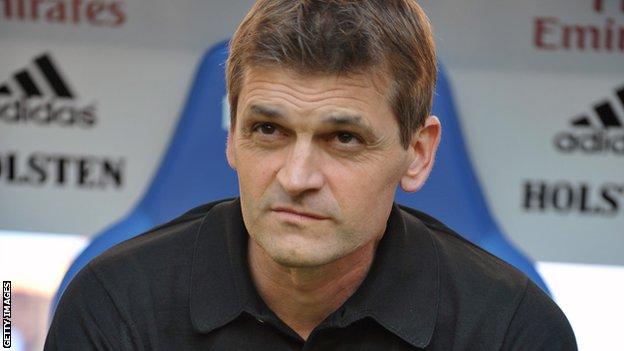 Barcelona coach Tito Vilanova has been discharged from hospital after undergoing cancer surgery.

The 44-year-old had an operation on his parotid gland on Thursday and now faces six weeks of chemotherapy.

A Barcelona statement read: "Given the post-surgery progress, Tito Vilanova has been discharged from hospital. It went as planned."

He had a cancerous tumour removed from his throat in November 2011.

Barcelona beat Valladolid 3-1 on Saturday and afterwards Xavi, who scored their opener goal, said: "We wanted to dedicate the win to Tito.

"He's not going through the best of times but now he's home, and that's great news. The operation went well and we worked hard to be able to dedicate this victory to him."

Barcelona had announced that Vilanova had fallen ill again on Wednesday. The club said he might be able to return to coaching while continuing his treatment but made no suggestion as to when he might return to work.

Assistant coach Jordi Roura, who has been on the Barcelona coaching staff since 2009, is taking charge of the team while Vilanova is away.

Vilanova was first treated for cancer in 2011 when he was Pep Guardiola's assistant at the club. He had surgery, chemotherapy and radiotherapy at that time and returned to the squad after 15 days, ahead of schedule.

He took over as head coach from Guardiola at the end of last season after four seasons as assistant manager with the first team and another with the B team.

Since taking charge of the Catalan club, Vilanova has won 23 of his 27 matches in charge.

The La Liga leaders are nine points clear of second-placed Atletico Madrid after 15 victories in their 16 matches in the Spanish top flight.

They have also qualified for the last 16 of the Champions League, where they will face AC Milan.