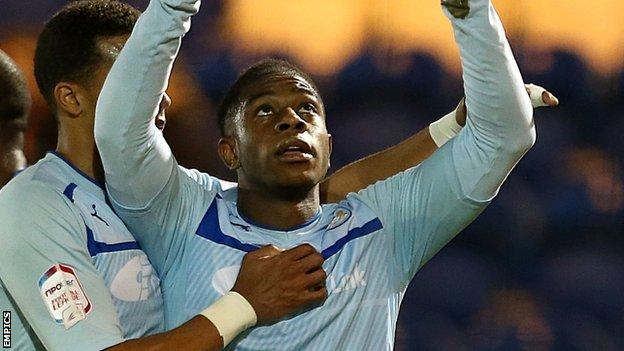 Coventry City midfielder Franck Moussa hopes to stay with the Sky Blues when his short-term deal ends in January.

The 23-year-old Belgian has played a big part in Coventry's revival over the last three months, scoring in their three big recent away wins at Hartlepool, Colchester and Doncaster.

"The fact that the manager has put his trust in me and that the team are doing well is a good combination."

The player and his agent have been in talks with the club and Moussa is confident that a deal will be done.

Moussa began his career with Belgian giants Anderlecht before joining Southend United, from whom he joined Leicester City in August 2010.

After being released by Leicester this summer, Moussa was one of Sky Blues manager Mark Robins' first signings when he arrived at the Ricoh Arena as a free agent back in September.

And Moussa admires the job Robins has done in lifting Coventry from the League One relegation zone to 13th in the table - just seven points off the play-off zone.

"He tries to get the best out of the players and out of the team and he makes it a decent environment to work in," said Moussa.

"And, when the team does win as well, it makes it even better."