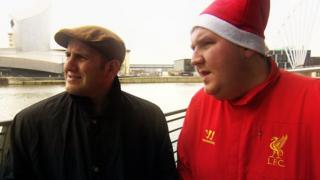 The duo's impressions include David Beckham predicting Southampton will thrash Sunderland 7-4 and former Chelsea boss Jose Mourinho, who thinks the Blues will struggle against Aston Villa.

Watch Football Focus on BBC One at 12:15 GMT on Saturday.