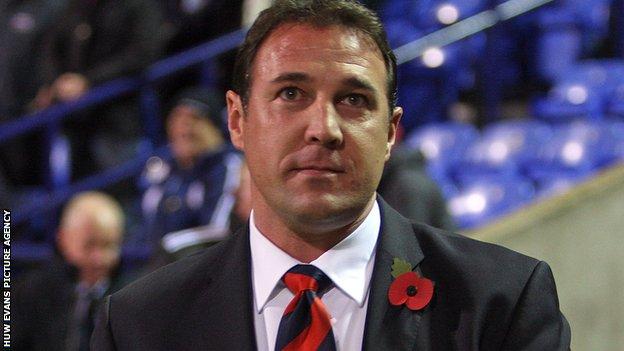 Manager Malky Mackay has said he does not expect Cardiff City to be busy during January's transfer window.

Cardiff are currently top of the Championship and have been linked with Derby County full-back John Brayford.

Although Mackay has dismissed those reports he accepts there will speculation before the transfer window reopens on 1 January.

"There won't be much business done in January," Mackay said.

"People always want to see your clubs linked to players. It's what people talk about in the pub and who our next signing is going to be.

"There will always be speculation with clubs at the top of the division as to who they're buying.

"We'll be looking to our whole squad and if good players come up then we take it on its merits."

The Cardiff manager said he did not anticipate any departures in January although he did not rule out players going out on loan to gain experience.

"There's nobody in the squad that I want to leave the club," Mackay.

"If come January the reasons for someone going out on loan would purely give them a wee bit of experience."

The Championship leaders visit fifth-placed Leicester City on Saturday and Mackay has no fresh injury concerns ahead of a fixture he describes as a tough game.

Nicky Maynard is a long-term absentee, but Mackay is hopeful striker Tommy Smith will be fit to return in the New Year.

Former Queens Park Ranger Smith has not featured since October's win over Watford due to a hamstring injury.

"[He's] coming along nicely, but we're making sure that we tread carefully on that one," Mackay said.

"He's outside doing work which is good. I'm positive that I'll have him for over 20 games."

Mackay is pleased captain Mark Hudson is available for Saturday's game at the King Power Stadium after serving a one match ban.

The 30-year-old defender missed Cardiff's shock home defeat to Peterborough last Saturday and is expected to return to the starting line-up.

"He's been a real good leader for us and has put very consistent performances in."