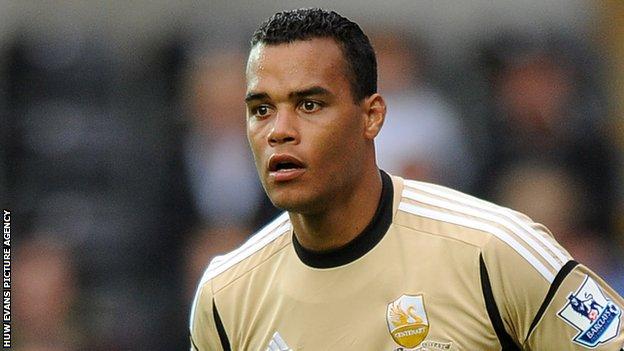 Michael Laudrup has said goalkeeper Michel Vorm is ready to return for Swansea City's game against Manchester United on Sunday.

Vorm has been out for eight weeks after suffering a groin injury in the defeat at Manchester City in October.

Gerhard Tremmel has deputised for Vorm and the German has impressed as Swansea moved into the top half of the Premier League.

"Michel is back in full training so he is back in the squad," Laudrup said.

"I don't want to say he will definitely play but Michel is ready.

"You always miss players when they are not there but people have asked if we've missed him because they think Gerhard has done well and I agree."

Tremmel, who moved to south Wales in August 2011, had made only five appearances for the Swans before he was handed an extended first team run following Vorm's injury.

Laudrup has been impressed by Tremmel during Vorm's absence and is keen to hand a new contract to the former Red Bull Salzburg stopper.

"Being a second goalkeeper is the most difficult position you can have because you hardly ever play and you have to wait and wait," added Laudrup.

"And as a manager you don't know what the reaction will be when they come in because they can be rusty.

"But Gerhard has done well and it is very important to know you have a goalkeeper of quality when things happen. He has surprised me. I didn't know him a lot but he has done well.

"It is the last year of his contract and we'd be delighted if he can stay here for one more year.

"It will be up to him because he's had a taste and maybe he would want to go somewhere and be a number one. But I will be pleased to have him."

In addition to Vorm, Laudrup also has winger Pablo Hernandez back after a thigh injury but right-back Angel Rangel is set to miss out again with a calf injury.