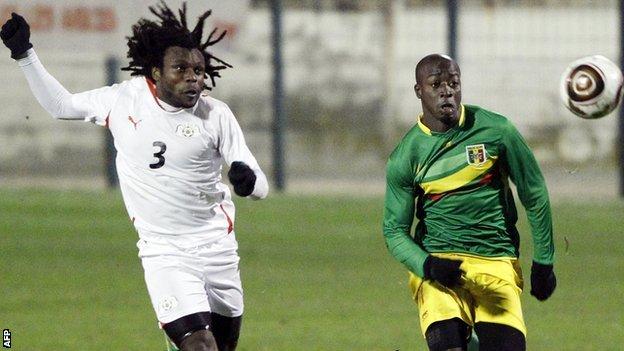 Congo Brazzaville have been handed a 3-0 win from their opening 2014 World Cup qualifier, after Fifa ruled that Burkina Faso fielded an ineligible player.

The original match, played in Ouagadougou at the beginning of June, ended in a goalless draw.

The same player, though, did feature for Burkina Faso during qualifying for this year's Africa Cup of Nations, triggering protests from Namibia.

Namibia argued that they should have replaced Burkina Faso, and even took their case to the Court of Arbitration for Sport (Cas).

Cas ruled that Zengue was eligible, having married a Burkinabe woman and being in possession of a valid nationality certificate since 2006.

This is the second time in a matter of days that Fifa has acted, though - it seems - only because the rule infringement occurred during a match under their direct control.

Fifa previously chose not to get involved in the Zengue case, when it involved matches controlled by the Confederation of African Football (Caf).

Earlier this week, Fifa awarded Niger a 3-0 win by default, after ruling that Gabon had fielded an ineligible player.

Like in the case with Zengue, Caf had cleared Charly Moussono, who then featured at the Nations Cup.

Niger and Gabon feature in the same qualifying group as Congo and Burkina Faso.

A Fifa statement read: "The Fifa Disciplinary Committee has decided that the Burkina Faso FA has breached art. 55 par. 1 of the FIFA Disciplinary Code (Ineligibility).

"The decision of the Fifa Disciplinary Committee is subject to appeal, and is therefore not yet final and binding."

Burkina Faso have until mid-January to lodge any appeal.

This outcome means Congo now has two wins from their opening two qualifiers. They top Group E on six points, followed by Niger and Gabon on three points each, with Burkina Faso now on zero.