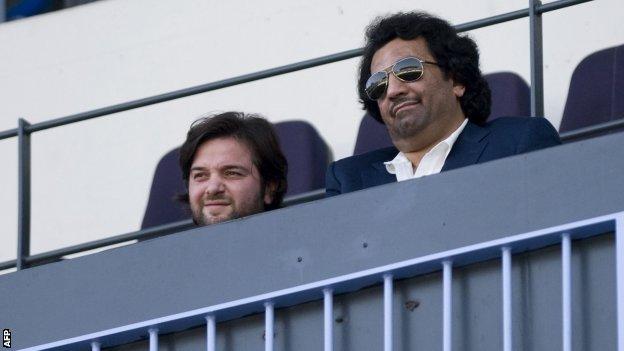 Malaga have been banned from European competition for at least one season because of unpaid bills.

The suspension will not affect the Spanish club this campaign, as they aim for the Champions League last eight, but any time in the next four seasons should they again qualify for Europe.

The ban has been issued by football governing body Uefa, which is seeking to stop clubs spending beyond their means through Financial Fair Play.

A Uefa statement said: "Uefa's club financial control body has taken its first decision due to the presence of significant overdue payables.

"Malaga is excluded from participating in the next Uefa club competition for which it would otherwise qualify for in the next four seasons."

The club responded by claiming they have been made a "scapegoat" by Uefa.

"Malaga wishes to express its total disagreement at the decision issued today by Uefa, and considers the intended actions against the club to be completely unjustified," said a statement.

"The club believes they are being made a 'scapegoat' and an 'example of' by Uefa by this unfair treatment."

Malaga were also fined 300,000 euros (£244,000) and face a further season's ban unless they can prove by the end of March that they have settled outstanding payments to other teams, staff and tax authorities.

The fortunes of Martiricos, who face Porto in the last 16 of the Champions League, looked to have changed for the better when Sheikh Abdullah Al-Thani of the Qatari Royal Family was named owner in June 2010.

Argentine defender Martin Demichelis, Brazil's Julio Baptista, Frenchman Jeremy Toulalan and Chile's Manuel Iturra have all been brought in by manager Manuel Pellegrini over the last two years as the club qualified for the Champions League for the first time in their history.

However, Malaga sold key players Santi Cazorla, who is now at Arsenal, and Joris Mathijsen, to Feyenoord, last summer.

And there was internal trouble with former Manchester United striker Ruud van Nistelrooy and Cazorla among a handful of players to threaten legal action over unpaid wages last season.

The LFP (Liga de Futbol Profesional) had imposed a transfer ban in January after the club missed a payment to Osasuna for Spain full-back Nacho Monreal.

Meanwhile, five other clubs face similar one-year bans during any of the next three seasons unless they can convince the governing body they have cleared stipulated debts.

They are Hadjuk Split and Osijek from Croatia, Rapid Bucharest and Dinamo Bucharest from Romania, and Partizan Belgrade from Serbia.