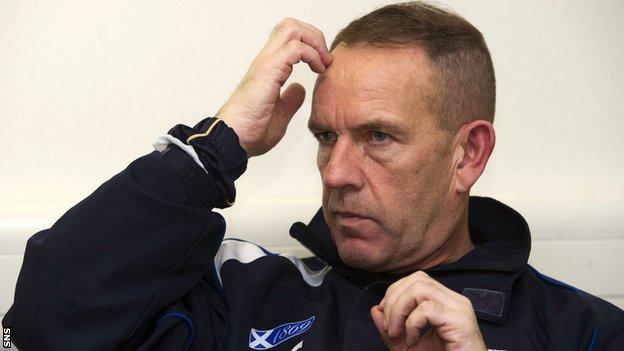 Kilmarnock manager Kenny Shiels does not regret comments about an official that have led to him facing another disciplinary charge.

Shiels was sent to the stand during a match in which Andrew Dallas was serving as fourth official.

I learned a lot about dignity from Craig Brown

And the Killie boss, currently serving a touchline ban, will appear before the Scottish FA after accusing Dallas of "outrageous fabrication".

"I've got a clear conscience," said Shiels ahead of the meeting with Hibs.

"When you're sinned against like I have been then you don't regret anything.

"No-one has shown remorse to me. I'm surprised at that, but it's important that we put it behind us and move on and I move on where I've got no fear because I've got a clear conscience and that's a big advantage."

Asked how he thought his current dispute with the SFA would end, Shiels responded: "I don't know, it's way out of my thoughts at the moment."

Kilmarnock beat Aberdeen 2-0 at Pittodrie last weekend, with the Dons having Jamie Langfield sent off for a foul on Borja in the first half.

Shiels felt Langfield had been dismissed "unfairly" and admired how Aberdeen's Craig Brown had dealt with the situation and hoped to learn from the veteran manager's example.

"I learned a lot about dignity from Craig," Shiels said. "He keeps his counsel and he's really good and a great man, a great pioneer for the right way to do things and he bites his tongue.

"I try my best. I'll try not to show my emotions as best I can. Sometimes you don't do anything wrong and you get punished for it.

"My behaviour's been impeccable. The problem is I've been truthful and it's not good to be truthful in this industry.