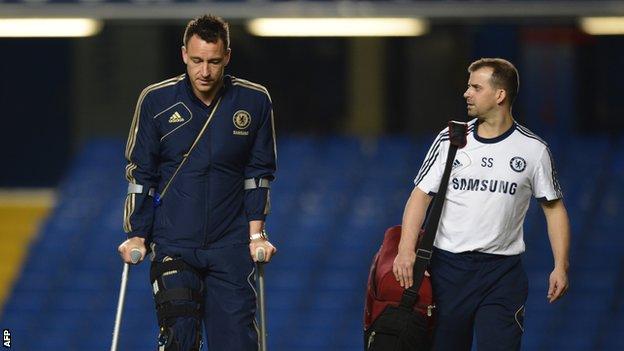 But despite the original prognosis of a three-week absence, Terry is yet to return to full-contact exercises in training and will definitely miss Sunday's game with Aston Villa.

"It's one step forward, one step back," said Benitez.

"The knee is quite complicated [but] at least he's now on the pitch - that is positive news - but we cannot say, we cannot predict how long it will take."

When asked if Terry would return within the next fortnight, ahead of games against Norwich, Everton and Queens Park Rangers over the festive period, Benitez was non-committal.

"I hope so but I am not a doctor, so I cannot guarantee anything," said the Spaniard, who was confident Terry would not require further surgery.

Benitez, who has not had Terry available for selection since he took charge, would not discuss reports the former England captain was close to beginning talks on a new contract. His current deal expires in June 2014.