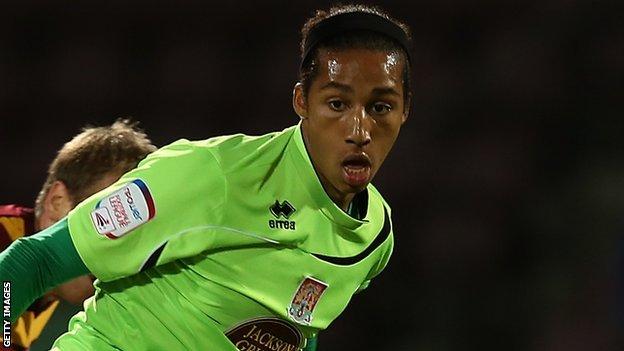 Northampton Town's Lewis Wilson hopes to 'send a message' to manager Aidy Boothroyd while on loan at Kettering.

The 19-year-old has scored four goals in six appearances for the Poppies and is on loan with the Evostik Southern Premier side until 2 January.

Wilson told BBC Radio Northampton: "I'm there to prove a point to myself and show that I can play at a higher level.

"I wanted to come out on loan. Being on the bench isn't a way of me showing Aidy what I can do."

Wilson added: "Scoring goals is a good way to send a message."

Kettering Town are bottom of the Southern Premier, 19 points from safety, and only moved into positive points for the season with victory over Barwell on Tuesday.

They had been deduced 10 points for entering a Company Voluntary Arrangement in the summer.

"It has been difficult," he continued. "There's been lots of new faces coming in and out and it's about getting some consistency.

"But it's a chance to get games and if I'm playing well, and that gets back to Aidy, it'll put my foot in the door when I get back and I can start making a few more appearances.

"I spoke to him briefly after the 7-0 defeat [to Gosport Borough] and he said it's all about your next game and how you bounce back from that.

"Winning again on Tuesday night [against Barwell], it showed character from us. We don't want to lay down and die just because we're at the bottom of the table. We want to give it a fight."

Wilson, who has only featured for the Cobblers 11 times since making his debut last April, says he does not know whether his loan at Kettering will be extended.

"I just want to be playing football," he said. "I want to push myself and play at the highest level possible, whether that comes in the new year or next season."