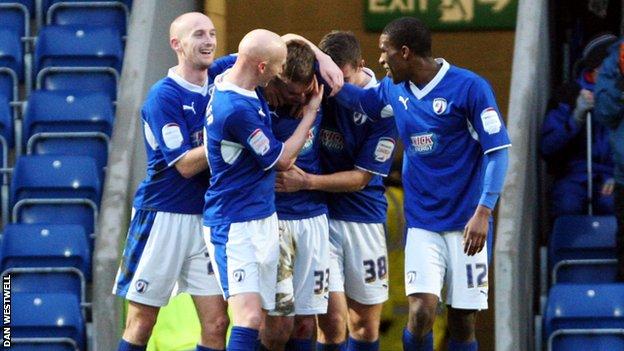 Conor Townsend scored his first goal for Chesterfield before being sent off as the Spireites drew with Morecambe.

However Townsend, on loan from Hull, sent home a fine free-kick to level for the home side, only to see a straight red on the hour for an alleged elbow.

Chesterfield continued to press, and could have grabbed a late winner when Danny Whitaker's shot crept just wide.

"I thought the lads kept going. We were disappointed we didn't win the game with it being at home.

"But credit has to go to Morecambe a little bit as well, they came here and played a similar system to us.

"Today was a story of two goalkeepers, I thought Barry Roche was excellent in goal for Morecambe and Tommy Lee's save at the end [was key].

"On reflection of the game, it was probably a fair result."