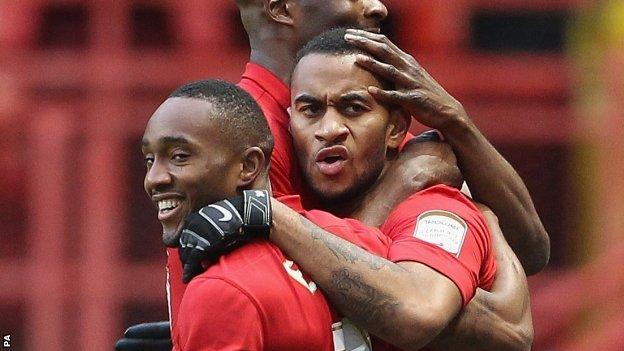 Charlton's winless run now stands at six matches after a Jamie Ward penalty earned Derby a point at The Valley.

The hosts took the lead through a superb run and shot from Danny Haynes, but lost their goalscorer shortly after with a hamstring injury.

Derby's Ben Davies and Nathan Tyson went close, before Michael Morrison fouled Richard Keogh to earn a second yellow and give the Rams a penalty.

Ward tucked away from the spot, before John Brayford almost won it late on.

Derby are in the middle of a poor run of form themselves and came into the game on the back of defeats to Hull and Burnley.

They could have found themselves two goals adrift, but Morrison failed to make a firm connection to Yann Kermorgant's tempting cross.

At the other end, Addicks' goalkeeper Ben Hamer tipped over Davies' free-kick and was alert to keep out Tyson's effort.

But Charlton had the upper hand at the start of the second half, with Cedric Evina and Dale Stephens crashing narrowly over the top before Bradley Pritchard rattled the bar.

The hosts' hard work was undone as Morrison brought down Keogh, allowing Ward, who had come on for Hughes just two minutes earlier, to draw the visitors level.

The Rams could have headed back north with all three points, but Brayford's header ricocheted off the post and to safety.

Charlton boss Chris Powell: "We needed that, especially after going down to 10 men. I'm happier than Boxing Day - there were a couple of turning points.

"With Morrison getting sent off, the players showed a lot of resilience. We've a lot to build on. They were testing conditions and we dug in to get a point."

Derby manager Nigel Clough: "We started the second half strongly and deserved the point. That is two out of three we've conceded on the road and we need a bit of luck.

"We did everything we could - we got it off the line. We certainly didn't want o lose today, we're hardly a negative side."