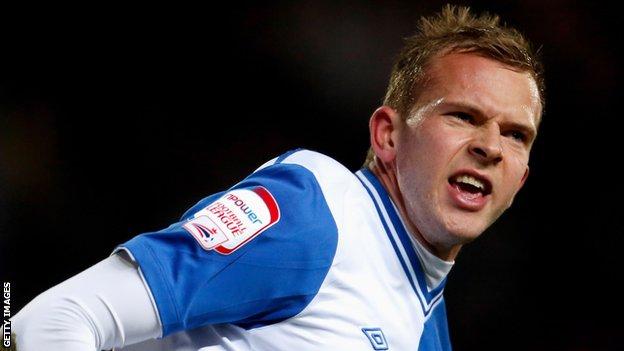 Jordan Rhodes netted his 12th goal for managerless Blackburn Rovers as Barnsley slumped to a defeat that resulted in Keith Hill being sacked.

Hill was dismissed after a 3-1 defeat that sent the Tykes to the bottom of the Championship table.

Josh King opened the scoring for Rovers from close range before a sublime effort by Ruben Rochina made it 2-0.

A year to forget for Blackburn

This was Blackburn's 13th win in 43 league games in 2012. Twenty of those games ended in defeat.

Stephen Dawson reduced the deficit only for Rhodes to make sure of victory from Jason Lowe's long ball.

Blackburn's first win in seven games was a positive end to a bad week for the Lancashire club, who sacked manager Henning Berg on 27 December.

King, on loan from Manchester United, broke the deadlock in the 29th minute after Luke Steele had saved his initial shot.

Rovers doubled the lead on the stroke of half-time, Rochina storming into the penalty area before firing past Steele at his near post.

Dawson set up a grandstand finish with a 20-yard finish in the 76th minute.

But Rhodes, who cost £8m from Huddersfield, made it 12 goals in 21 starts for Rovers after Barnsley's Marcus Tudgay had been carried off on a stretcher following a collision with Rovers goalkeeper Jake Kean.