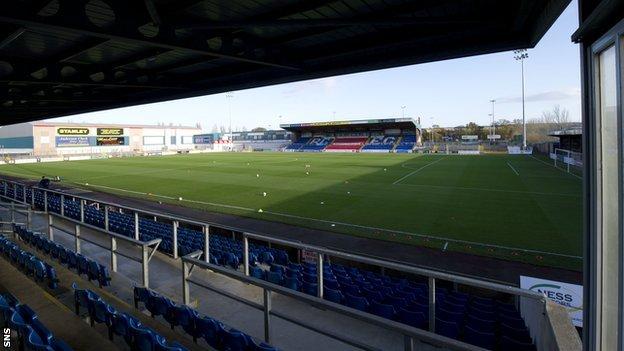 Hearts managing director David Southern has slammed the timing of the decision to call off their match at Ross County.

Referee Iain Brines postponed the Scottish Premier League game less than an hour before kick-off because he felt the Victoria Park pitch was unplayable.

"It does defy belief that we can have a game in the most northerly point of league football called off one hour before kick-off," said Southern.

County will pay for Hearts supporters' buses for the rescheduled game.

That gesture was made by County chairman Roy MacGregor, who apologised to the travelling fans on BBC Radio Scotland.

"Ross County will pay for the buses when they come back up here," he said.

"We really feel sorry for them that they have come all this way.

However, Southern was upset that Hearts supporters had wasted time and money making their way to the Scottish Highlands.

After talking to both managers he felt there might be some danger to the players, so we accept that

"We have seen games go ahead in far worse circumstances. We are very disappointed, to say the least," he said.

"It is the referee who makes the decision; all I can express is thorough disappointment that the match is not going ahead.

"My understanding is that the referee arrived at the ground between one o'clock and half-past one.

"Given the rain that has fallen across the country, would it not have been more prudent to arrive mid-morning?

"A number of fans have travelled from far and wide. We have supporters clubs in Manchester, York and London who travelled for this game."

MacGregor has suggested to Hearts that the match could be played on 2 February or 6 March, dates set aside for the Scottish Cup, a tournament from which both have been eliminated.

The County chairman explained the sequence of events that led to the match being postponed.

"He [Brines] was concerned with small bits on the park and he did an inspection at quarter to two, asked us to do some work, and came out again.

"There are a couple of spots where the ball isn't running well - 95 per cent is playable but safety and the pace [of the players] has changed the game.

"The safety of the players is of paramount importance.

"After talking to both managers he felt there might be some danger to the players, so we accept that.