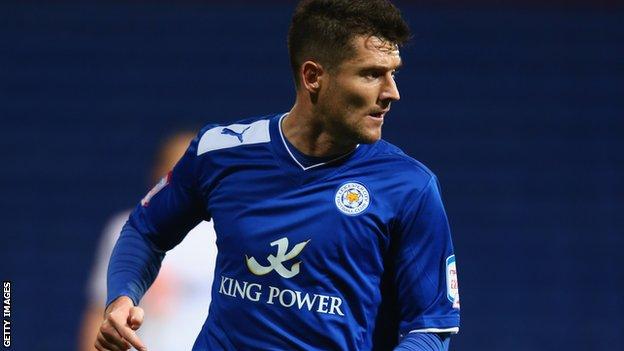 The Foxes went into the game without a goal in three matches, but Nugent scored his 12th goal of the season from close range after a pass from Wes Morgan.

Burnley made the brighter start, with Chris McCann firing wide from distance.

At the other end, Leicester's Ben Marshall twice came close, first seeing an effort blocked by Kieran Trippier and then bringing the best out of Burnley keeper Lee Grant, who tipped his effort around the post.

Martin Paterson, who replaced the injured Austin, brought a save out of Kasper Schmeichel, before Nugent broke the deadlock just after the half-hour.

Leicester continued to create chances in the second half but Schmeichel had to be at his best to deny Paterson from point-blank range.

Burnley striker Danny Ings then saw an effort blocked by Liam Moore as the Clarets battled to the end but could not rescue a point.

"Today it was all about getting three points and it didn't matter how we did it. We got the result and it's good to finish the year on a decent note."

Burnley manager Sean Dyche: "We could've nicked a point but I don't think we did enough to win the game. We didn't use the ball well enough or keep the ball well enough. We did create some chances to be fair and we did make a really good one right at the end, but with our performance levels I think a point is the best we could've expected.

"We believe we're building a good thing here, the mentality and belief of the players is changing, but I was a little bit disappointed that we didn't play with that manner, confidence and belief."