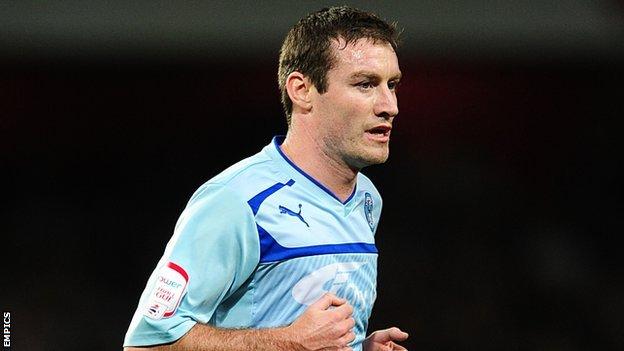 Coventry City came from behind to win at MK Dons and go 10 games unbeaten.

MK led when Daniel Powell finished off his jinking run with a fine strike, but Franck Moussa superbly levelled, carrying the ball from the halfway line before lashing it into the net.

Ryan Lowe expertly found enough space to grab his fifth goal in as many league games to regain the lead.

The Sky Blues survived a late scare when Angelo Balanta missed a clear opportunity, but they have now lost just once in their last 14 games in all competitions.

The result moved them to within two points of the League One play-off chasing Dons, who have now suffered defeat in three of their last four matches.

"I don't think we deserved to get beat today, it was five minutes of madness.

"We don't normally concede in that period (after half time). We generally come out in the second half all guns blazing.

"Today I don't think there was too much wrong.

"I thought we competed. The performance was important and it's important we understand where we go from here."

"We were magnificent. We were really good with and without the ball, I was more than pleased.

"The players were outstanding in every department. We got to see the good side of the players who have been on the sidelines - Stephen Elliott thoroughly deserved his goals - they've delivered a performance that's amongst the best this season.

"We're now within two points of MK Dons which puts it into perspective. A great day's work, this was excellent.

"Our feet are firmly on the floor. There is a good attitude, and a will to do well for our supporters. We were like the home team. For the supporters it's a great end to a year that started off not too promisingly.

"MK Dons are a really good side, they can be physical and are certainly play-off material."