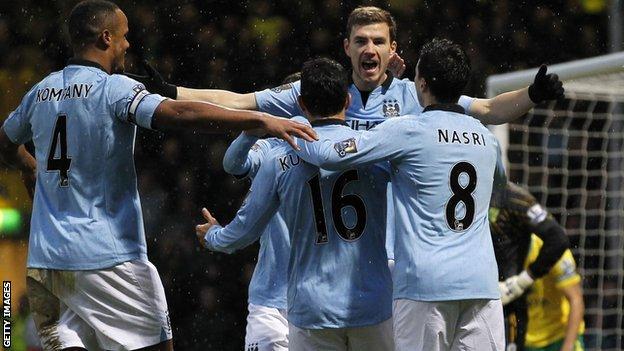 Ten-man Manchester City held off a determined Norwich to win a pulsating game at Carrow Road.

Anthony Pilkington's free-kick gave Norwich hope but, despite the visitors having Samir Nasri sent off, Sergio Aguero added a third for the champions.

Norwich's Russell Martin scored twice either side of a Dzeko shot that went in off the post and keeper Mark Bunn, as the visitors clung on for victory.

The champions, beaten at Sunderland on Boxing Day, were made to demonstrate their appetite to retain their Premier League title with a victory achieved despite the handicap of losing Nasri to a straight red card on the stroke of half-time.

The French winger and Sebastian Bassong squared up to each other after a strong tackle from the latter took both the ball and Nasri, who reacted angrily and appeared to flick his head towards the Canaries defender - though the visitors were clearly aggrieved at what they regarded as a very harsh decision.

The talk following the shock defeat at the Stadium of Light had all been about Manchester City's misfiring strikeforce, and their forwards seemed to have taken the criticism to heart judging by the rampant start at Carrow Road.

"Manchester City were given a huge scare by Norwich City but they have passed a big test at Carrow Road. They clung on for the win and what a way to sign off 2012 and what a match."

The first goal was beautifully worked as Aguero picked out David Silva on the edge of the area and he slipped a first-time pass to Dzeko, who sent a shot into the bottom corner.

Norwich barely had time to regroup before their opponents added a second.

Canaries keeper Bunn was tempted out of his goal in an unsuccessful attempt to close down Aguero, who laid the ball back for Dzeko to slot into an empty net.

Norwich complained about a challenge from Vincent Kompany on Bradley Johnson in the build-up to the goal but it was allowed to stand.

The visitors were then almost gifted a third when home defender Javier Garrido's poor backpass was tipped over the crossbar by a backtracking Bunn.

But the Canaries have beaten Arsenal and Manchester United at Carrow Road this season and they responded with Pilkington's 20-yard free-kick, which found the net via a deflection off Gael Clichy.

Down to 10 men, Roberto Mancini's side restored their two-goal lead after half-time when Aguero raced on to a Yaya Toure ball before classily dinking the ball over Bunn.

But the home side pressed forward undeterred, Jonathan Howson having a shot palmed wide by keeper Joe Hart.

From the resulting corner, a Robert Snodgrass cross was nodded back across goal by Bassong and Martin was on hand to guide in a header and reduce the deficit to one again.

The visitors might have thought they had put the match out of reach when Dzeko's fierce drive came back off the post and hit keeper Bunn on its way into the net but Norwich were still not finished, Martin grabbing his second when he diverted a Bradley Johnson shot into the net following a goalmouth scramble after 75 minutes.

Mancini's men managed to keep Norwich at bay for the remainder of the game and remain seven points adrift of leaders Manchester United in second.

"Manchester City showed why they spend the amount of money they do for the offensive players they have, but you can't be 2-0 down so early on and expect to have a good day.

"However, we displayed great character and certainly at 4-3 it seemed it might be going our way, but again they showed real good quality.

"I cannot fault the endeavour of the players we have got, so now we will look to go again."