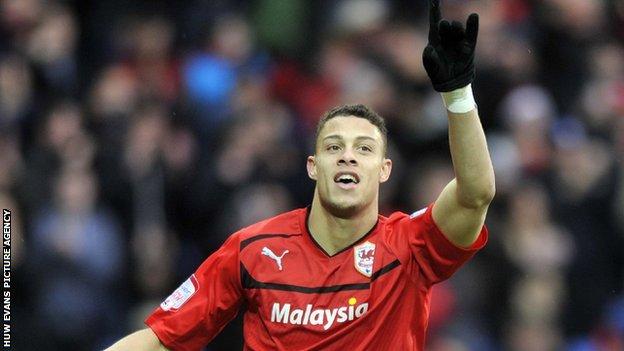 Rudy Gestede's early goal was enough to see off visitors Millwall and restore Cardiff's five-point lead at the top of the Championship.

The Frenchman proved the wisdom of starting him in place of Heider Helguson with a poacher's strike, sliding in to meet Craig Noone's cross.

Craig Bellamy could have made it safe for Cardiff but lobbed over the bar.

Cardiff already knew that they would end 2012 as Championship leaders, but the narrow win over the Lions restored their healthy five-point lead after in the day's early kick-off.

The club that has topped the table at the end of a calendar year has gone on to win promotion to the Premier League in each of the last seven seasons.

Cardiff have suffered repeat heartache in the play-offs but the long-suffering Bluebirds fans can go into 2013 with quiet confidence.

While Millwall have managed just a point from their last three games, Kenny Jackett's side remain in touching distance of the play-off places.

Cardiff in contrast now go to Birmingham on New Year's Day seeking a fourth win out of four in the busy holiday period.

Malky Mackay's side can then look forward to a FA Cup third-round trip to trip on 5 January to Macclesfield Town, after the Blue Square Bet Premier side won their replay against Barrow on Saturday.

Peter Whittingham nearly capped his 250th league appearance for Cardiff with an early goal but saw his shot deflected over the bar.

But the Bluebirds did not have to wait long for the opener in a flowing seventh-minute move sparked by Whittingham's flick out to the wing.

Noone collected the ball and jinked his way past Shane Lowry to pick out Gestede, who got across the front of his marker to deflect the ball into the Millwall net.

Cardiff's lead was only kept intact thanks to a fine save from David Marshall, who flung himself to claw away Henderson's goal-bound header.

Millwall goalkeeper David Forde was also in fine fettle, denying Mark Hudson from a corner when the Cardiff defender was given too much time and space in the area.

Bellamy had been to the fore of Cardiff's efforts in a bright first half but after the break missed a gilt-edged opportunity to take the game out of Millwall's reach.

The Wales striker surged through on Forde but his attempted lob sailed over the crossbar as well as the relieved Millwall keeper.

That chance apart, and a cheeky long-range effort from Hudson from near the halfway line, Cardiff were subdued in the second half.

Millwall prodded and probed but were largely limited to pot-shots at the home goal and Marshall was rarely called on to extend himself.