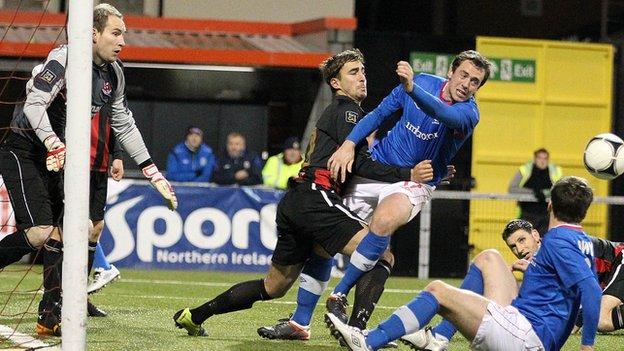 Five of Saturday's Irish Premiership matches have been postponed because of waterlogged pitches.

The only top flight game going ahead is on Seaview's artificial pitch where second-placed Crusaders face champions Linfield.

The game gives Crusaders a chance to reduce Cliftonville's lead at the top of the table to four points.

However, Linfield are equally in need of the three points and victory would lift them up to third in the table.

Leaders Cliftonville's trip to Donegal Celtic was called off after an early morning pitch inspection at Suffolk Road.

The five matches called off have been rearranged for Tuesday, 15 January.

The Glens trio had been set to miss the mach against Ballymena because of one-match suspensions.

In Championship One, the H&W Welders v Warrenpoint Town fixture is off.

The Intermediate Cup ties between Ards and Desertmartin and Dergview and Moyola, have also been postponed.