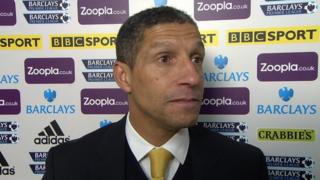 Norwich manager Chris Hughton says West Brom's equaliser was a "poor goal to concede" following their 2-1 defeat at the Hawthorns.

Hughton argues that the corner that led to Zoltan Gera's scrappy goal was a wrong decision that was compounded by his side's failure to clear the ball.

Romelu Lukaku sealed victory for the home side in the 82nd minute to end Norwich's 10-match unbeaten run.