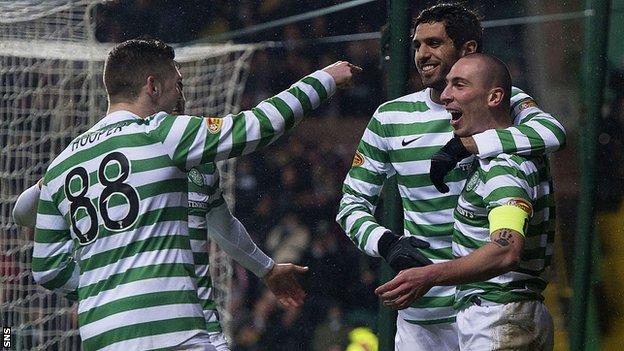 Manager Neil Lennon was full of praise for Scott Brown after the Celtic skipper opened the scoring in the 4-0 win over Ross County.

"It was another great captain's role," enthused Lennon. "His all round game is very good at the minute.

"He's ticking along brilliantly. I think he's in the form of his life and has been for most of the season.

"He's got goals in him. That's two goals in the last three games and I'm very pleased for him."

Brown has been dogged by a long-term hip problem and the midfielder thought he might have to undergo surgery after the Champions League group stage action.

We're looking to strengthen the left-hand side

However, the 27-year-old Scotland international has been at his dynamic best in recent weeks and got through another busy 90 minutes against County.

"It's an incredible recovery when you think back to the Nou Camp and at Benfica when we could only get an hour out of him," said Lennon.

Brown's midfield colleague, Victor Wanyama, also drew words of acclaim from the manager, who had recently valued the Kenyan at a tongue-in-cheek £25m.

"I was getting fed up with people asking about him, so I threw that out there," explained Lennon.

"But, the more he plays, he's starting to look like certainly a £15m to £20m player anyway.

With Gary Hooper scoring twice and James Forrest also on target, Celtic have opened up a five-point lead at the top of the Scottish Premier League with a game in hand over most of their rivals.

But, with a tie against Juventus to look forward to in the last 16 of the Champions League, Lennon is keen on adding to his squad in January.

"We're looking to strengthen the left-hand side," he said before adding that Celtic were "top-heavy" with strikers.

"If anything happens to Emilio Izaguirre, we're sort of putting square pegs in round holes.

"So maybe we can get in another recognised left-back.

"But, if I come out of window with same squad that I've got, I'll be pretty happy."

Celtic were level at the break against a County side that had twice threatened on the break in the first 45 minutes, prompting a few stern words from Lennon in the dressing-room.

"I just wanted more intensity to our play," he told BBC Radio Scotland. "It felt like some of them were going through the motions

"And I got the perfect response. We were a bit sloppy in the first half after a good start

"The shape was diamond and sometimes that leaves the full-backs exposed.

"Second half was a lot more like us. We were more clinical in front of goal.

"I thought Gary Hooper was brilliant for the whole 90 minutes and James Forrest coming back gave us extra dimension.

"It's a great win at home. It's been coming for quite a while now."