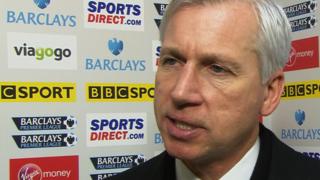 Ameobi came off the bench to score his third goal of the season and earn the Magpies a 1-0 win which lifts them away from the Premier League relegation zone.

Pardew believes his side is currently "playing well" despite their lowly league position, and says the strength of his substitutes made the difference against Harry Redknapp's Rangers team.