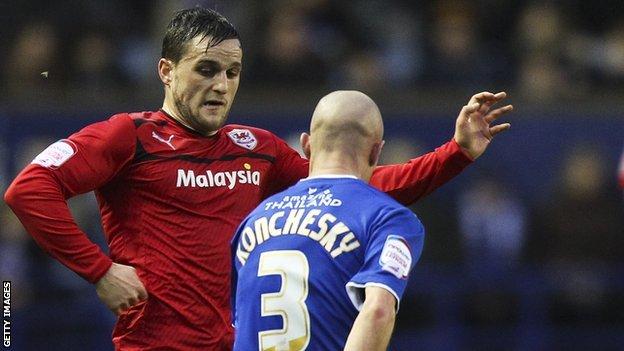 Cardiff boss Malky Mackay says Craig Conway has given him a selection headache ahead of the Championship leaders' Boxing Day clash against Crystal Palace.

A day after withdrawing a transfer request, winger Conway, 27, was "magnificent" in Cardiff's 1-0 win at Leicester, according to Mackay.

He said fellow Scot Conway was equally effective in attack and defence.

"He was nothing short of magnificent," said the Scottish manager.

After making 39 appearances for the Bluebirds in the 2011-2012 season, Conway had made only four appearances this season up to the middle of November.

But the ex-Dundee United player has been an ever-present since coming on as a substitute in the 1-1 draw at Derby on 27 November.

"Craig… has had to bide his time, but that's what a squad's for - to make sure that when you're called upon you're ready; and you go in and you make it difficult for the manager to leave you out," Mackay added.

"He scored a goal for us a couple of weeks ago, he's set up a couple for us so far [since].

"And against Leicester I thought he was nothing short of magnificent both in his defensive duties... and the way he found some lovely little positions where he wasn't picked up and was able to cause Leicester problems in the attacking half."

Victory over the Foxes ensured Cardiff are leading the promotion race at Christmas, but Mackay says Palace, who are also in the hunt for a Premier League place, will provide stern opposition on Wednesday.

on Saturday and Mackay said: "There are no easy games in this division.

"You see results popping up all over the place that you would not probably take on your coupon.

"But we've got another tough one coming up against Palace on Boxing Day.

"I've been in this division long enough to know that when you start believing your own hype, that's when you're in trouble."