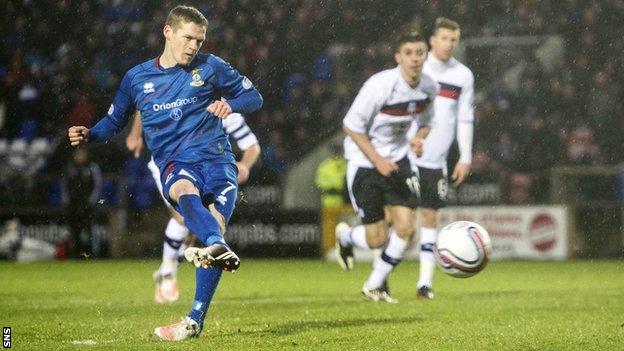 Inverness manager Terry Butcher hopes Billy McKay's enjoyment of his football will persuade the striker to remain with the Highlanders.

"He enjoys his football. The level of his performance has risen. He's improving all the time."

Butcher described McKay's scoring exploits as "just incredible", with the 24-year-old having grabbed 12 in his last seven games.

"It's just phenomenal," said Butcher. "He gives us a great length to our game.

"We've equalled our goalscoring feat for last season. We've scored as many goals in under half a season as we did for the whole of last season, so we're obviously very pleased about that.

"With this team, if we can keep this team together for next season in particular then it holds a great future for the club."

Owain Tudor Jones and Andrew Shinnie were also on target against Dundee and Butcher was delighted to be celebrating Christmas Day second in the Scottish Premier League.

"This game I was really, really worried about because we were expected to win it," explained Butcher.