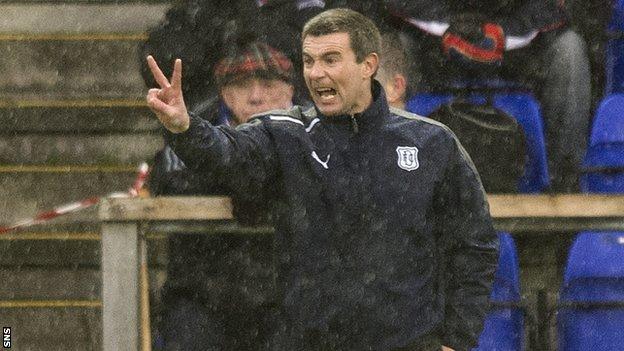 Dundee manager Barry Smith was frustrated that bad habits returned to haunt his side against Inverness.

, with Smith rueful of his team's defending.

"We have to cut out the mistakes, which we had done for the past wee while. Unfortunately, today we weren't quite at it and that showed.

"We had started well and we thought we should've at least gone in level at half-time but basic errors cost us."

Nicky Riley levelled the match after Billy McKay had fired Inverness ahead from the penalty spot.

"We did create chances throughout the game," said Smith, with his side remaining six points adrift at the bottom of the Scottish Premier League.

"It's about taking those chances at the right times.

"We've got the belief in the dressing room that we can [get off the bottom of the league] and while that belief's there, we've got every chance.

"We're not totally detached from anyone. We feel as if we're still attached to the group at the bottom so it's something to aim for."

And Smith hinted at moves to strengthen his squad in January.

"We're always looking to bring players in and hopefully there's money made available," he added.

"Obviously, the board of directors will decide that."