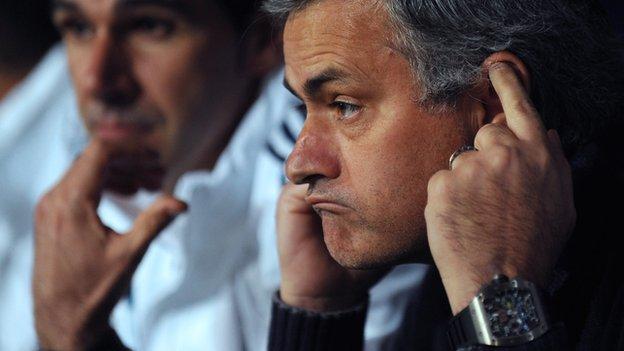 Jose Mourinho insisted he would not resign as Real Madrid coach after his side lost 3-2 at Malaga to fall 16 points behind leaders Barcelona.

Mourinho appeared incredulous when asked if he was worried about his job.

"I'm not worried at all and I'm not going to resign," he said. "I'm not a child, I know that results count.

"If I felt the players did not want to continue I'd be too honest [to carry on]. But they are not like that. We are just lacking some luck, that's all."

Isco put Malaga ahead in the 49th minute before an own-goal by Samuel Sanchez put Real level. Former Blackburn and Manchester City striker Roque Santa Cruz gave Malaga a two-goal breathing space with strikes in the 73rd and 76th minutes after coming on as a substitute.

At the moment, for me and my coaching staff, [Antonio] Adan is better than Iker [Casillas]

Karim Benzema pulled one back eight minutes from time, but it was too late to prevent Malaga from clinching their first win over Real since 1983.

Mourinho admitted that Real's chances of defending their league title were now over.

"I think it's an insurmountable lead. Last season we won the league with a similar gap and now we are not going so well. I'm not happy with that but this is the reality," he said.

The Portuguese manager also defended his decision to drop goalkeeper Iker Casillas to the bench, instead choosing to start 25-year-old Antonio Adan.

It was the first time in 10 years that the World Cup winner had been dropped by Real.

"At the moment, for me and my coaching staff, Adan is better than Iker," Mourinho said. "We have been struggling in a number of areas, one of those has been defence. The coach analyses who is in the best situation to play and chooses his team and that is what I have done.

"You [the media] can invent what you want but it's purely a technical decision."