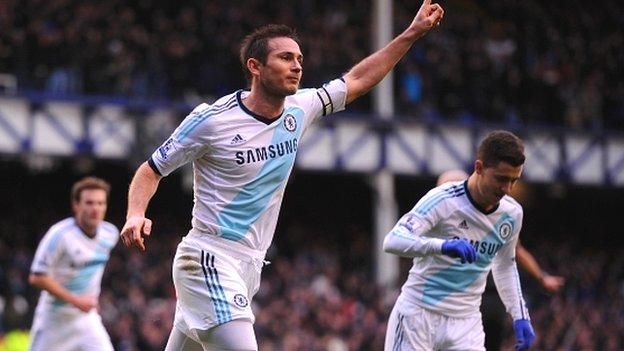 Frank Lampard served a timely reminder of his goal-scoring ability as his double carried Chelsea back to third with a hard-earned win over Everton.

The 34-year-old, who is out of contract in the summer, headed in Ramires' cross and stabbed in from close range after his side had conceded in 62 seconds.

Steven Pienaar gave Everton an early lead, following in after Victor Anichebe nodded against the post.

Nikica Jelavic hit the bar and missed a late chance as the hosts fell short.

Chelsea's fourth successive league win under interim boss Rafael Benitez, after failing to win in his first three, means the Blues finish 2012 four points off Manchester City and 11 off leaders Manchester United, but with a game in hand on both.

Whether Lampard finishes 2013 with the Stamford Bridge club remains in doubt, with the England midfielder free to agree pre-contract terms with a foreign club in January.

For all the promise of Oscar and Eden Hazard and the undoubted ability of Juan Mata, Chelsea's travelling fans made it clear that they believed that it is to soon to consign Lampard, who joined the club 11 and a half years ago, to Chelsea history.

His goals brought to an end Everton's formidable unbeaten run at Goodison, which stretched back 14 previous games to March's 1-0 defeat by Arsenal.

The home team certainly settled into the match like a team at ease in their surroundings, scoring with their first attack.

In the absence of Seamus Coleman and Phil Neville, Phil Jagielka roamed forward from his unaccustomed right-back spot to deliver a cross that Anichebe nodded against the woodwork. Pienaar gleefully dispatched low past Petr Cech.

With the South African and his midfield partner Leon Osman weaving dangerously in the spaces between David Luiz and Lampard, Everton continued to pen Chelsea back after the opener.

Jelavic smacked the post with a free-kick after he and Pienaar had hustled Gary Cahill out of possession - and Osman's first-time effort demanded a smart save from Cech.

The home fans revelled in their early dominance, taunting Fernando Torres and Rafael Benitez, so long Liverpool figureheads, on their return to Merseyside.

But it was the third of Chelsea's Spanish contingent - Mata - who looked likeliest to silence a boisterous Goodison.

A last-ditch block from Johnny Heitinga denied the former Valencia man, before his probing prised apart Everton again; Ashley Cole inches away from turning in from Cesar Azpilicueta's subsequent cross.

Chelsea's equaliser capped a spell of pressure and ensured Lampard a Premier League haul of five or more goals for the 16th successive season.

Manager David Moyes could not inspire a repeat of Everton's rollicking start to the match as Chelsea, despite the half-time withdrawal of Cech with an ankle injury, started better after the break.

Torres drifted dangerously into space behind Leighton Baines but mis-controlled Luiz's pass, strayed offside to ruin a delicious move, and had a sweetly struck snap-shot from 20 yards saved by Tim Howard.

Without the presence of Marouane Fellaini, who was serving the final game of a three-match ban, Everton struggled to capitalise on the industry and invention of Pienaar and Baines down the left.

The one time that Jelavic met a Baines delivery, his stooping header beat substitute goalkeeper Ross Turnbull but not the bar.

Three minutes later Chelsea were in front for the first time.

Mata was instrumental, crossing for Hazard to nod down before Lampard instinctively volleyed home after the Spaniard's initial effort had been palmed back into the six-yard box.

Jelavic squandered a fine chance to level in injury-time, swiping thin air as he attempted to smash home a Baines cross, but Chelsea could have already made the game safe when Sylvain Distin stretched to intervene as Torres bore down on Howard in the final minute.

Everton manager David Moyes: "We're not disappointed because we played really well and we've run the European champions really close. but we didn't quite have enough in the end.

"We had played well enough to get a second goal but had been unfortunate, having shots back off the woodwork.

"I thought we were a bit unlucky. We tried to make what we had work the best we could today and for long periods I thought we did."