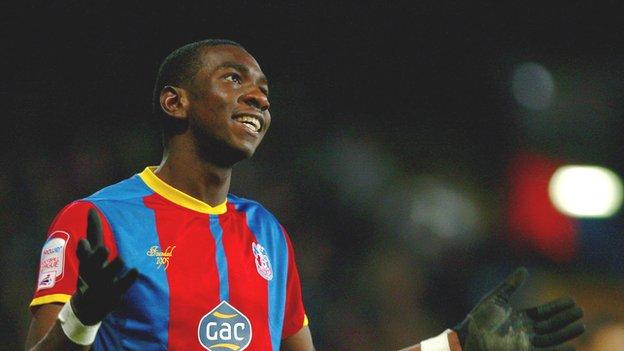 Crystal Palace winger Yannick Bolasie has rejected the chance to play for DR Congo at the 2013 Africa Cup of Nations.

The uncapped 23-year-old was named in the Leopards' initial squad of 28 players bound for South Africa.

But his agent, Tony Finnigan, says he will not be accepting the call-up.

"He's not going. Of course Yannick has thought about it but he just decided it's not the right time at this stage," Finnigan told BBC Sport.

"It would mean missing a lot of matches and that would disrupt his Palace career when he is just starting to play regularly."

But Finnigan insisted that Bolasie has not ruled out the possibility of playing for DR Congo in the future.

"It's an honour but he feels playing for Congo is something that can come later," he continued.

"They are in a rebuilding process and have identified someone who might be important for the future.

"His parents still live over there and they are very keen but we've agreed it's best to wait for now."

Peterborough's manager Darren Ferguson has expressed his concerns about losing Zakuani for the duration for the tournament.

There is also a return for 31-year-old former captain Lomana LuaLua, who led the attack in the team's last Nations Cup appearance in Egypt in 2006.

The selection also includes Parfait Mandanda, younger brother of fellow goalkeeper Steve, who was in the France squad at the Euro 2012 tournament.

DR Congo depart on a two-week preparatory camp to Oman on 4 January before opening their Nations Cup campaign against Ghana 16 days later.

They also play Mali and Niger in Group B of the 16-team tournament.