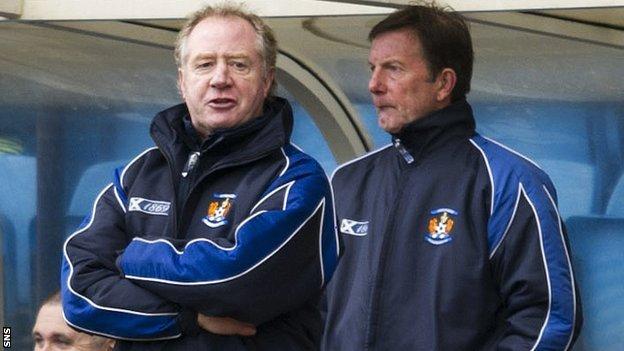 Paul Heffernan's lob put the hosts in charge, but Eoin Doyle restored the balance with a close-range strike in the 26th minute.

"We're disappointed, because we lost the ball on the halfway line and they scored from it," said Nicholl.

"I thought, defensively, we could have dealt with it a bit better."

Nicholl, who oversaw the match from the dugout as manager Kenny Sheils served the second game of his three-match ban, said Killie surrendered their advantage too easily.

"I'm disappointed because we had a good start," said Nicholl.

"I thought they played well today, but when you get off to a good start, you're hoping then to get a second one, and we nearly did.

"Apparently, we should have had a penalty as well, which I didn't see - but fair play to Hibs, I thought their movement and passing was good and they posed us a few problems without Cammy Bell having much to do.

"But we were below par today."

The point keeps Kilmarnock in eighth place in the Scottish Premier League table and Nicholl insists work will be done to improve performance ahead of the visit of Hearts on Boxing Day.

"We didn't create enough chances for the strikers, our play just wasn't good enough," he added.

"We were hoping after last week when we got three points away from home that we would get a wee run of home wins, but we've been disappointing at home this year, to be honest.

"We can't put our finger on it all, because we have a good squad of players and good quality in the team - you've got to give the opposition credit.

"If they stop you playing, then you have to give them credit. We have to work harder to get there and don't concede the fact that if they stop us passing the ball around, then that's it.

"We have to work harder off the ball to get ourselves good possession."