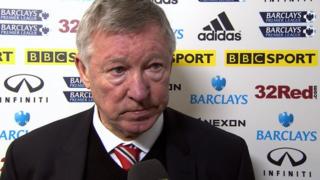 Sir Alex Ferguson calls for Swansea defender Ashley Williams to be banned after he appeared to deliberately kick the ball at Manchester United striker Robin van Persie while he was on the ground.

Ferguson says he believes Van Persie could have been seriously injured and has asked the FA to look at the incident.

Manchester United lead the Premier League by four points going after 1-1 draw with Swansea, Patrice Evra put United in front but Swansea hit back through Michu.