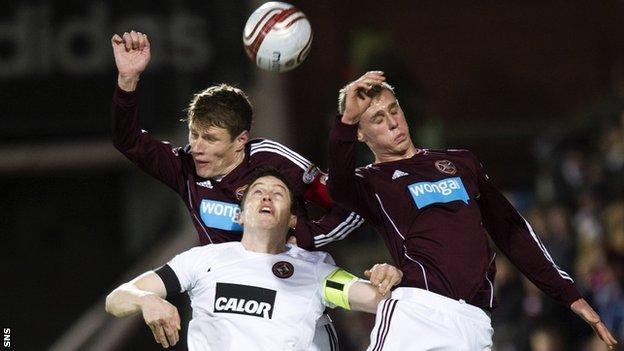 Having led 2-0 at half-time, United halved their deficit early in the second half and enjoyed spells of pressure in the final half-hour.

"Dundee United whipped in some great corner kicks and Andy Webster or Marius [Zaliukas] or Ryan McGowan got their head to every one," said McGlynn.

"We're delighted to get three points and to get higher up the table."

Ryan Stevenson's first-half double had put the hosts in command before Keith Watson's consolation for United.

"Two-nil's always a dodgy lead," said McGlynn. "We had to dig in and the lads did exactly that.

"For every chance that Dundee United had, we had probably equally as good a chance, if not better.

"I'm delighted to have won. We climb a few positions in the table and the feel good factor's good."

The win moves Hearts above United into sixth place in the Scottish Premier League, with McGlynn having changed his system to a 4-4-2 in recent weeks.

"We were playing good football, very good football in the 4-3-3, we were creating chances but we weren't taking them," explained McGlynn.

"It's not necessarily about formation but, by hook or by crook or whatever we are scoring now.

"And, as the manager, that helps me because the more games you win, the more chance you have of staying in your job."