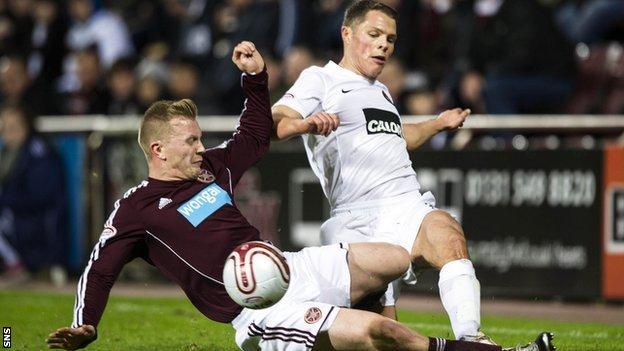 Dundee United manager Peter Houston is convinced his side can climb up the table, so long as they eliminate the mistakes that cost them against Hearts.

Sloppiness by Brian McLean allowed Hearts in for Ryan Stevenson's opener and the midfielder netted again from the penalty spot before half-time.

Keith Watson pulled one back for United but they could not find a leveller.

"It was individual errors again that cost us," said Houston. "Again, we give ourselves a mountain to climb."

The Tangerines have slipped to eighth in the table, having dropped four points in their last two games.

"I'm really disappointed because we put so much into the game," Houston told BBC Scotland.

"The first goal, big Brian, whose been playing well recently, made an individual error. I thought Gavin [Gunning] should've given him a wee bit of cover as well.

"And, all of a sudden, we find ourselves 1-0 down when I felt that we started quite well.

"I thought we battered them in the second half, we pulverised them and the ball doesn't break for us.

"If we cut out the individual errors, we'll not be long in climbing up this table because as far as I'm concerned, taking Celtic out of it, we're as good as any team."

Former Hearts favourite Rudi Skacel had a hand in Watson's goal but had an otherwise frustrating game before being substituted.

"I thought he worked really hard, he maybe tried too hard," added Houston.

"He's been playing well recently. The reason I took him off was to get another striker on. He's 33 year of age, he shouldn't let occasions like this get to him."