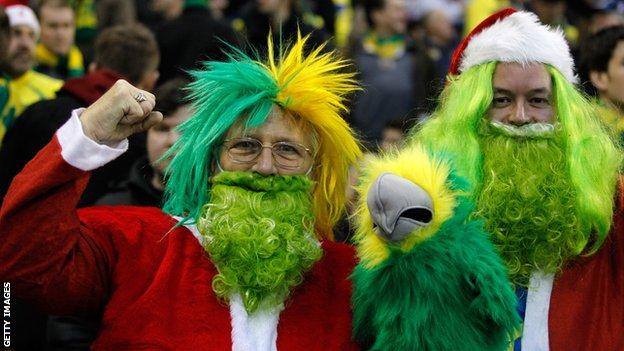 Table toppers Manchester United are looking to extend their four-point lead when they host Newcastle on a packed Boxing Day round of fixtures.

Champions Manchester City will try to keep in touch with a win at Sunderland.

At the other end of the division, rock bottom Reading will hope for a much-needed win at home to Swansea while QPR face surprise package West Brom.

There is also a full programme of Football League and Scottish football matches to take in.

After a weekend for the Manchester clubs that began with a 92nd-minute winner against Reading for City and ended with United's draw against Swansea, Boxing Day could see yet more twists in the title race with the teams separated by only four points.

Both clubs failed to win their respective fixtures last season, and managers Sir Alex Ferguson and Roberto Mancini will demand there is no repeat.

On the back of the breathtaking 8-0 win against Aston Villa, Rafael Benitez takes his third-placed Chelsea side to Norwich safe in the knowledge that he possesses an excellent Boxing Day record as a Premier League manager of five wins from six games.

No team has drawn more festive Premier League fixtures than Benitez's former side Liverpool, and current boss Brendan Rodgers will be looking to buck that trend at Stoke.

Fulham will also be looking to redress a rotten run of form which has included just one win in 10 games when Southampton come to Craven Cottage.

With Arsenal's match versus West Ham postponed because of possible industrial action on the London Underground, Champions League qualification rivals Everton and Tottenham will look to build a lead in the table against Wigan and Villa respectively.

At the top of the Championship, leaders Cardiff are at home to third-placed Crystal Palace, while Hull will hope to extend their four-match winning run when they host fellow promotion hopefuls Leicester at the KC Stadium.

Peterborough looked on course for the drop but surprise victories in the last fortnight against Cardiff and Bolton mean if results go their way they can climb off the foot of the table with three points away at Wolves.

Tranmere boss Ronnie Moore will be hopeful of some much needed festive cheer at Prenton Park against Crewe after the second-placed club in League One fell to a stunning 5-0 defeat to Swindon last Friday. With leaders Sheffield United hosting second-from-bottom Scunthorpe, three points will be vital for the Wirral outfit to keep in touch.

Meanwhile, Swindon's trip to Leyton Orient was postponed on Christmas Day because of a waterlogged pitch at Brisbane Road.

The big game at the top of League Two sees fifth-placed Rotherham face second-placed Port Vale. Victory for the hosts at the New York Stadium will see the clubs go level on 40 points.

Only one point separates Wimbledon and Bristol Rovers in the relegation zone from Barnet, who face the unenviable task of travelling to first-placed Gillingham.

North of the border, Scottish Premier League champions Celtic have a great chance to extend their lead in the late kick-off when they travel to bottom-placed Dundee, who are without a win since 1 December.

The prospect of having to play three games in a week will test the strength of squads throughout the leagues as the hectic Christmas fixture list kicks into gear.

With so many points up for grabs, the rewards are clear. Whoever has been top of the table on New Year's Day has gone on to win the Premier League title in the last three seasons, while only three teams have escaped relegation in the last 20 years when placed bottom at the same time.