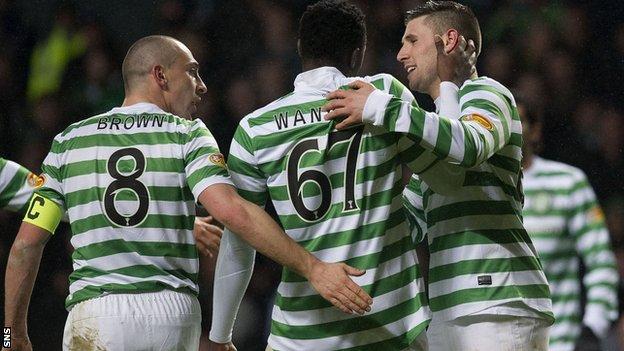 Manager Neil Lennon is pleased Celtic will get a rest in January after a busy opening half of the season.

There are three Scottish Premier League fixtures over the festive period before the top flight closes for two weeks.

And Lennon revealed that he is taking his players to Marbella in Spain for a training camp.

"We're Looking forward to the break," said Lennon. "The players are into the mid-30s in terms of games, so it is coming at a good time for everyone."

Saturday's 4-0 win at home to Ross County was Celtic's 32nd competitive game since the campaign kicked off with a Champions League qualifying tie against HJK Helsinki on 1 August.

Celtic have reached the last 16 in Europe's premier competition, are in the last four of the League Cup, made progress in the Scottish Cup and top the SPL by five points going into their Boxing Day visit to Dundee.

League matches against Hibernian and Motherwell follow in quick succession before the shutdown.

"It will give the players a chance to refresh themselves mentally and give their bodies a rest for a week," explained Lennon.

"We're going to Spain for a week's training and hopefully a bounce game at the end of it.

"Then we'll come back and do a mini pre-season training camp and get ready to go again."

Celtic go to Dens Park in search of a fifth consecutive SPL victory and Lennon believes his team are in good shape to continue their fine run of form.

"We are playing well at the minute and had an excellent second half on Saturday - a really good, top-quality performance from everyone, and with the likes of James Forrest coming back to the team, he gives us an extra dimension as well.

"The players have acquitted themselves brilliantly so far and we are halfway through the season and obviously we would just like to keep that going now.

"Whether other teams can stay with us, I don't know, but it doesn't look like Inverness are letting up, while Aberdeen had a good win at the weekend, so the league is still very vibrant."