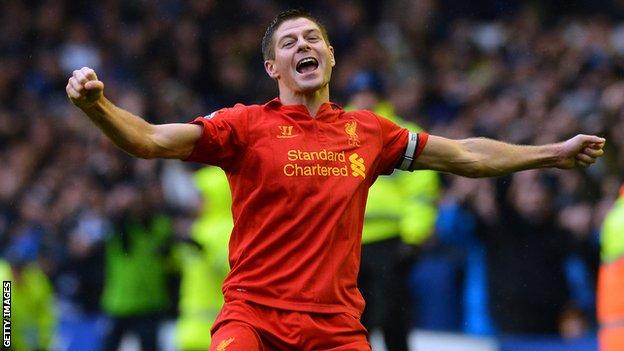 Liverpool manager Brendan Rodgers wants to extend Steven Gerrard's contract after saying the influential captain has "still got so much left".

Gerrard's current deal at Anfield expires at the end of the 2013-14 season and Rodgers is eager to secure the 32-year-old's future.

The England midfielder has scored 153 goals in 609 appearances for the Reds.

"I don't think there's any question [we want to extend his contract]," Rodgers told Liverpool's website. "It's vital."

Gerrard made his Liverpool debut in 1998 and captained the club to Champions League glory in 2004-05. He has also won the FA Cup twice, League Cup three times and Uefa Cup.

He has played in every minute of Liverpool's 18 Premier League games since Rodgers took charge at Anfield in the summer, scoring in each of the last two matches against Aston Villa and Fulham.

Gerrard has turned down opportunities to leave in the past, including a move to Chelsea in 2004.

"Steven has a real hunger to succeed. He's 32 years of age but he's still got so much left," Rodgers added.

"He's still been making the runs and his influence within the team has been outstanding.

"His influence for me, especially once he's started to understand what I'm looking for, has been absolutely first class.

"This is a guy who has led his life focused purely on being a footballer. And that allows you to go on playing well into your 30s."

"He's been an inspirational captain for us."

Gerrard won his 100th England cap in the 4-2 friendly defeat away to Sweden on 14 November.

He wore the captain's armband in Stockholm as he joined Billy Wright, Bobby Charlton, Bobby Moore, Peter Shilton and David Beckham as only the sixth England player to reach a century of appearances for his country.

"For me he can never leave Liverpool, it would be terrible if he did and I hope that he stays until the end of his career like Paul Scholes has done at Manchester United."