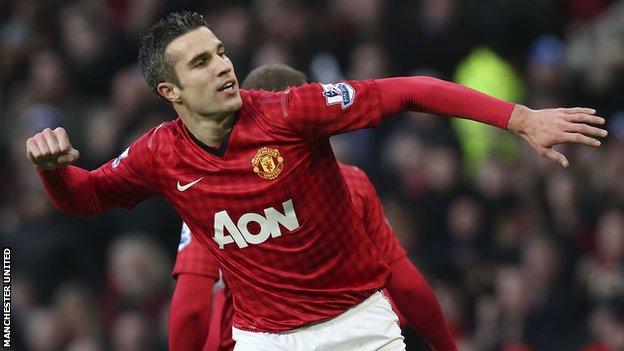 Robin van Persie is the "last piece of the jigsaw" for leaders Manchester United, Sir Alex Ferguson has claimed.

The striker's 12 goals in 18 games have helped the 29-year-old's new club to a four-point Premier League lead.

"I am reluctant to subscribe to the cult of an individual. But sometimes you find the last piece of the jigsaw," the United manager said.

United lost last season's title on goal difference but are currently the top scoring team thanks to the Dutchman.

Van Persie's timing in the league has also proved crucial as he has scored the opening United goal in five games and the winning goal in five games, with the highlight being the crucial 3-2 victory away to rivals Manchester City.

If his strikes were subtracted from his club's total, table toppers United would be 15 points worse off in eighth place.

His tally in all competitions is well ahead of the other first team United strikers, with Danny Welbeck 14 behind, Wayne Rooney seven goals off and Javier Hernandez closest to him on nine.

Van Persie's influence has been compared to that of iconic Frenchman Eric Cantona when he led United to their first league title in 26 years despite the fact that when he arrived from Leeds in November 1992 Ferguson's team were languishing in mid-table.

Speaking in the programme for Boxing Day's visit of Newcastle, Ferguson said: "We did it when we brought Eric Cantona to Old Trafford where he proved to be the right player at the right club at the right time.

"He became the catalyst and springboard for our surge to success.

"It doesn't have to be signing someone for a record fee. Cristiano Ronaldo was not a record buy either but he certainly made a difference as he prospered with us to the extent that he came to be regarded by a lot of people as the world's best player."