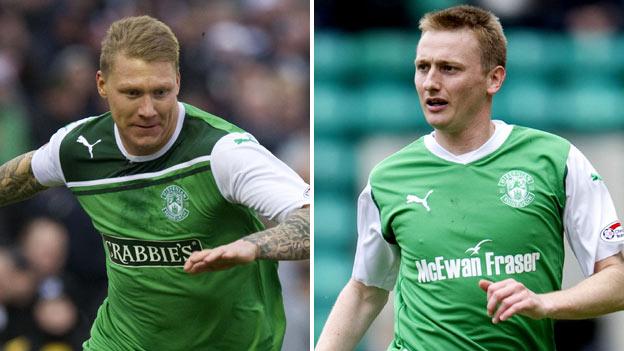 O'Connor, 29, has been released by Russian club Tom Tomsk after scoring one goal in six appearances.

Capped 16 times for Scotland, O'Connor moved to Siberia in the summer after a second spell at Easter Road.

He was signed in late September by Mark McGhee, who , but failed to score in 12 appearances for the League Two side.

Both players started their careers with Hibs and made their debuts for the club in 2001.

Both spent brief periods on loan in the lower divisions, O'Connor with Peterhead and Riordan with Cowdenbeath.

And both scored goals. Riordan found the net 64 times for Hibs, while O'Connor was not far behind on 59, with the duo dovetailing well in season 2004/05 under manager Tony Mowbray when the club finished third in the Scottish Premier League.

The symmetry continued in 2006 when the pair moved on; O'Connor to Lokomotiv Moscow in March for £1.6m and Riordan to Celtic in a cut-price £150,000 deal, with his contract running out.

O'Connor was soon back in Britain and spent four injury-troubled years at Birmingham City and an unhappy time at Barnsley before embarking on a second stint with Hibs for season 2011/12, scoring 16 goals.

Riordan's Easter Road return was swifter, with the forward enjoying another three seasons in Edinburgh from 2008, adding a further 40 goals, after failing to make an impact in Glasgow.

Prior to O'Connor's homecoming, Riordan left as a free agent to sign for Shaanxi Chan-Ba but played less than 10 games for the Chinese Super League club and finished last season as a bit-part player for St Johnstone.

Now both men find themselves as free agents, while another less fortunate link between the pair has been the propensity to generate off-field headlines for a variety of indiscretions.