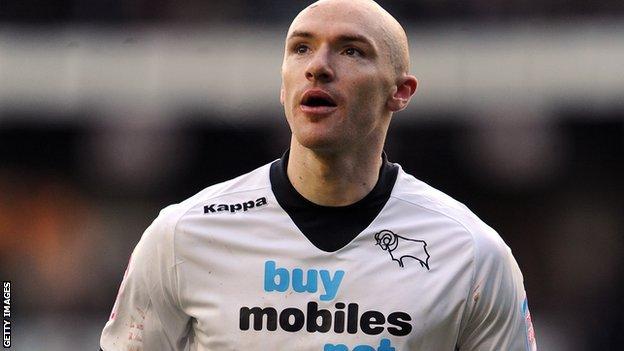 The Rams dominated early on and Michael Jacobs' close-range shot made it 1-0.

Fellow midfielder Jeff Hendrick added a second before the break, firing the ball into the corner from 20 yards.

Conor Sammon tapped home a third and Derby eased to victory, although Lukas Jutkiewicz did net for Boro late on.

The Rams have now won their last three New Year fixtures. Last season they beat Hull 1-0, and in 2010/11 they defeated Preston 2-1.

Boro arrived at Pride Park full of confidence having won four of their last five league games but ended up being well beaten by a Derby side who could easily have won by more and have now won five from seven at home.

Jacobs already had a goalbound effort blocked by Jonathan Woodgate, and was then narrowly off target with a 20-yard shot, before he put the hosts ahead after 19 minutes.

Ben Davies was the creator, finding Jacobs just inside the box and the 21-year-old coolly stroked a right-foot shot into the bottom corner of the net.

Hendrick then went close to making it 2-0 with a decent strike that went just wide, but he did double the lead with a fantastic strike from the edge of the box.

It was almost 3-0 by half-time when a Davies free-kick crashed back off the bar and the chances kept coming after the break.

Boro keeper Jason Steele was forced to make a point-blank save from Sammon and also denied the Rams striker when he was clean through.

But the third goal finally arrived after 65 minutes when some neat footwork from Will Hughes eventually saw Sammon tap the ball home after a Jacobs shot had been saved by Steele.

Boro offered little in attack but home goalkeeper Adam Legzdins did well to push away a fierce strike from substitute Ishmael Miller.

And they did get on the scoresheet in stoppage time when Miller teed up Jutkiewicz for a simple finish.

Derby manager Nigel Clough said: "We've played as well as this in games this season but considering the team we had out and the opposition, this is certainly up there. It's a remarkable result and a very good performance.

"It was a big ask physically today but we couldn't have asked any more from the players."

Middlesbrough manager Tony Mowbray: "It's disappointing to lose any game but you have to give Derby credit.

"They are a team full of energy and some very good players. We never got to the races at any stage of the game today.

"We've done okay so far this season but for whatever reason, we didn't get going at all today. But we will get stronger as the season goes on and players are back from injury."