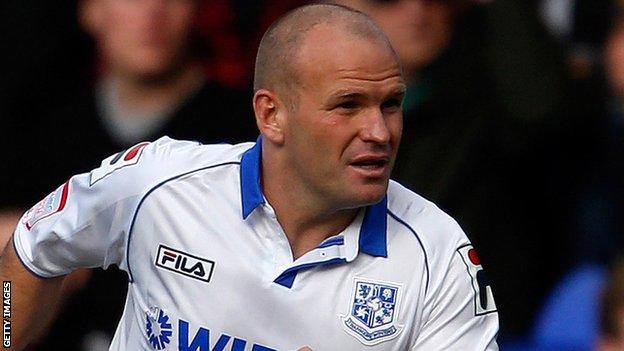 Tranmere remain top of League One, thanks to a second-half goal from Andy Robinson to beat struggling Bury.

Rovers were awarded a penalty late in the first half when Joe Skarz fouled Donervon Daniels, but Robinson was denied superbly by Trevor Carson.

Robinson later hit the crossbar, but it would be third time lucky for the midfielder as his deflected shot beat Carson to put the visitors ahead.

And despite a spirited performance and some late pressure in five minutes of added time at the end of the game, Kevin Blackwell's men were unable to force an equaliser.

They remain without a league win since 20 November, while Tranmere's promotion charge shows no sign of faltering.

Victory at Gigg Lane was their third successive win and it kept them clear of Sheffield United and Doncaster, who at the top of League One.

But much may depend on whether manager Ronnie Moore can reach agreements with Wolves and Sheffield Wednesday to keep and at Prenton Park for the remainder of the season.

The progress of both players will be assessed by their parent clubs after they completed the final match of their initial loan spells against the Shakers.

"I'm proud of the young players. There wasn't much between the two teams.

"If there was a difference, you can look at their experience to our inexperience in certain areas.

"These players have given me everything they've got and I can't complain. They've kept going and I don't think you can ask any more.

"I thought we did look a little tired today, but we've had FA Cup replays and Johnstone's Paint Trophy games thrown in during December and all the same players have been playing."

"I think we deserved to win. We could have had a couple more.

"It would have been nice for the penalty to go in. I didn't see the save because I never look at them.

"Andy keeps going and he's got that quality. It was a fantastic finish [for the goal] and it was enough to win the game."