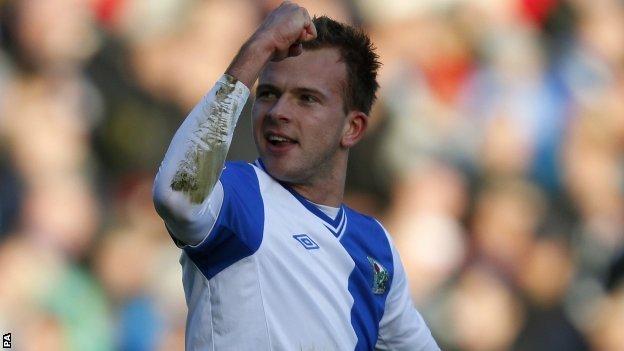 Blackburn went ahead after the break through Rochina when his own shot was deflected back off himself and past Forest goalkeeper Lee Camp.

Rovers goalkeeper Jake Kean then pulled off a superb save to deny Billy Sharp.

A composed finish from Rhodes doubled Blackburn's advantage before Kazim-Richards lashed home the third late on.

The last time Rovers secured back-to-back wins was when Eric Black was in temporary charge in October and now stand-in manager Gary Bowyer has a 100% record as Rovers added to their win over Barnsley on Saturday.

Henri Lansbury then flashed a 25-yard strike just wide for Forest before a scrappy end to the half.

Rovers were handed a bit of fortune for the opener as Rochina was blocked by Daniel Ayala but the ball cannoned off the Blackburn man's shin and went in.

Kean then tipped over a close-range header from Sharp before Kazim-Richards and Morten Gamst Pedersen combined to put Rhodes in and he put away his 15th goal of the season.

With 12 minutes to go, Kazim-Richards exchanged passes with full-back Adam Henley and then struck home to ensure McLeish has only one point in his first two games since replacing Sean O'Driscoll as Forest boss.

Blackburn caretaker manager Gary Bowyer: "I'm just giving the club a bit more time and then we'll see what that brings and what happens to myself and Terry (McPhillips).

"We're just carrying on and we'll keep carrying on until we're told otherwise and that's all we know.

"We got a bit of a lucky goal but it seemed to give us more energy and I can't praise the players enough. They have been remarkable with their efforts and deserved the win."

Nottingham Forest manager Alex McLeish: "I don't think there's a pot of gold available [for players] but we'll present the case to the owners and that's the way we'll work, to see what can be done.

"You couldn't have seen that result coming at half-time. They get a bit of a fluke goal and after that, there was a good reaction from our team.

"We had some pressure on them, culminating in a great pass, move and cross from [Dan] Harding to [Billy] Sharp and you've got to say the Blackburn goalkeeper played a big part in getting three points."