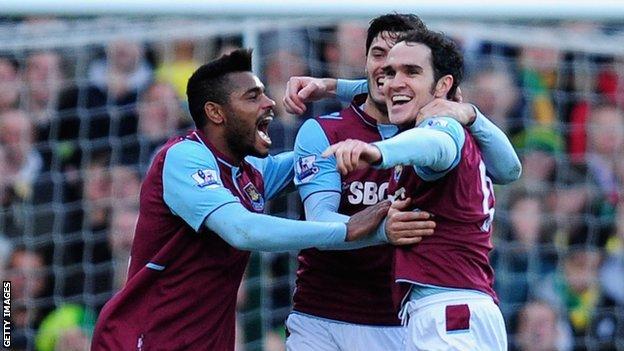 Mark Noble's controversial early penalty set West Ham on their way to a comfortable victory which consigned Norwich to a fourth consecutive defeat.

Noble calmly found the corner after three minutes when Ryan Bennett was deemed to have held down Winston Reid.

Norwich almost levelled when a Robert Snodgrass free-kick hit the post but Joey O'Brien's shot made it 2-0.

The hosts were largely untroubled after the break and secured the win despite Russell Martin's 90th-minute strike.

Defender Martin's third goal in two games produced a nervy finale, but could not prevent the Hammers leapfrogging their visitors and moving up to 11th place in the Premier League table.

West Ham's last league win over Norwich before today was in April 1992 - although they have since won home and away in FA Cup ties in 2005 and 2006 respectively.

The margin of victory - just West Ham's second in nine games - could have been far greater with Canaries goalkeeper Mark Bunn having to make several superb saves and the hosts also wasting a couple of glorious opportunities.

But Norwich will point to the harsh second-minute penalty award as the catalyst for their demise.

Three defeats in a row over Christmas had marred a 10-game unbeaten run for Norwich.

And although all three of those losses were against sides in the top seven - including Manchester City and Chelsea - the last thing their fragile confidence needed was to be chasing the game within three minutes. But like the home reverse against City, that is exactly what happened.

Their normally calm manager Chris Hughton was furious and bemused in equal measure as referee Mark Clattenburg penalised Bennett for grabbing Reid's shirt as a looping ball was played into the box.

Reid seemed to be impeding Bennett just as as much but Noble ignored the protests and stayed cool to convert the spot-kick and put the hosts ahead.

Norwich refused to be rattled, but a side deprived of both injured main strikers Grant Holt and Steve Morison struggled to create chances.

Despite a willing display from on-loan Tottenham teenager Harry Kane, they lacked punch and presence up front and West Ham cleverly stifled the main creative threat from the ever-lively Wes Hoolahan.

Snodgrass was desperately unlucky with a brilliant 20-yard free-kick that hit the post with the score at 1-0, and they appealed for penalties of their own when the ball hit Reid on the arm, and then after the break when Kane tumbled in the box under a challenge from James Tomkins.

But West Ham, with Noble in dominant form and midfield partner Jack Collison equally impressive on his first start this season, played with a greater tempo and created the majority of the chances.

Bunn pulled off a breathtaking one-handed reaction stop to keep out Collison's effort just before the hosts made it 2-0 when O'Brien continued his run into the box to sidefoot home from 10 yards after great work by Noble.

Norwich appealed for a foul by Carlton Cole on Alex Tettey in the build up but Clattenburg waved play on, much to Hughton's disgust.

The visitors will feel they have every reason to complain about referee Mark Clattenburg's decision to award an early penalty but West Ham had the better chances and could easily have won by more. Norwich managed to hang on for 2-0 at half-time but could not find a way back into the game after the break and slip to a fourth successive defeat.

Matthew Taylor's fierce 20-yard strike then forced a save from Bunn before the otherwise impressive Cole produced a terrible miss when he somehow skied the ball over the bar from three yards after a fabulous move on the right involving Noble and Guy Demel.

West Ham sat deeper after the break and Norwich saw much more of the ball but were still unable to create much.

Kane appealed hopefully after tumbling when racing through on goal while at the other end the Hammers almost added a third goal when Ricardo Vaz Te's header hit the post.

But West Ham did not need the security of a third despite Martin pulling a goal back with just over 30 seconds of normal time remaining when he did brilliantly to volley into the corner of the net from substitute Elliott Bennett's right-wing cross.

"I was wondering if we were going to hold our confidence and performance level at home. It has been really good even though we have had two back-to-back defeats. They showed they have the mentality to cope with whatever is thrown at them.

"We are glad that their goal didn't come a bit earlier but it's a shame the score did not reflect how well we played. We should have scored a few more and and we did it with really good football. We deserved the win.

"Often in a crowded penalty box it is impossible to give penalties like that, but I could see it from where I was in the dugout. That early goal gave us the confidence to go on.

"The disappointing thing was the chances the front lads missed, with balls just flashing across the box needed a tap in.

"We lost a goal in the 90th minute which made us edgy in the end when we should have been out of sight. We will continue to try to brush up on our finishing techniques with the lads and hope the next time round we are more clinical with our finishing."

"The key decisions in the game did not go in our favour, but we did not start well enough.

"We accept Ryan Bennett had hold of the lad's shirt, but I also saw Reid's forearm in Ryan's chest. They are very close, he is not pulling Reid so he cannot get away, it is something you see game in and game out right throughout the country.

"On almost every occasion you do not see a penalty, particularly when it is so early in the game, so I was very surprised when he gave it.

"I also don't accept it was not a foul on Alex Tettey leading up to the second goal and certainly was a handball in the first half and then the incident on Harry Kane. We have been on the end of poor decisions.

"We showed in the second half a bit more of what we are about. Nobody has really given us a beating and they have all been really close games. We have to be at our best to get results and we have been close in the last four games."