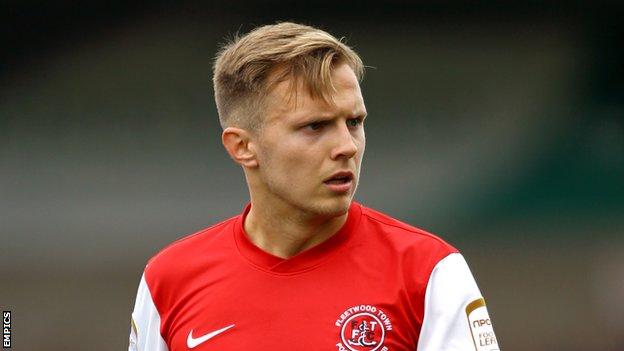 Port Vale failed to return to the top of League Two after being comfortably beaten by Fleetwood.

After Gillingham regained top spot with a 1-0 win at Southend in an early kick-off, Vale fell behind when David Ball turned in Junior Brown's free-kick.

And on their first ever trip to Vale Park, the Cod Army made it 2-0 through Alan Goodall's close-range header.

Vale's Jennison Myrie-Williams was then felled by Dean Howell in the box but saw his penalty saved by Scott Davies.

The hosts looked bereft of any confidence and ideas, with both Louis Dodds and Myrie-Williams spurning other good opportunities.

Defeat for Vale means they now lie two points behind the Gills, while Fleetwood are now just three points off the League Two automatic promotion places in sixth after a run of five matches unbeaten.

"It's a very pleasing feeling. We did exceptionally well against a very good team. To keep a clean sheet and score two goals - I couldn't ask for more.

"You've got to give Port Vale respect - they're top of the league for a reason.

"Some of the football we played was exceptional and the boys at the back had to do their jobs as well because Vale put us under pressure as well."