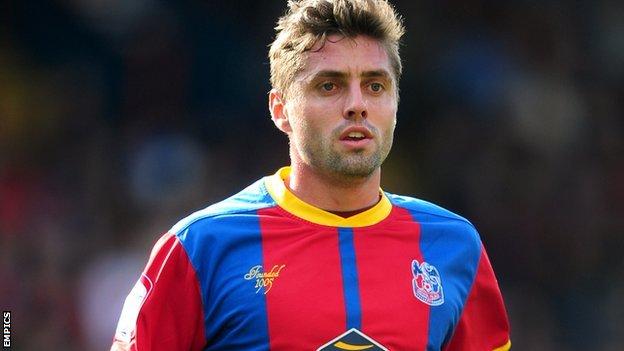 Andre Moritz scored twice as Crystal Palace defeated Wolves to move to within two points of an automatic promotion place in the Championship.

The Eagles went ahead after Bakary Sako fouled Wilfried Zaha and Moritz fired the free-kick past keeper Carl Ikeme.

Zaha was involved in Palace's second as he slid a pass to Yannick Bolasie, who nudged the ball into the net.

A second Moritz free-kick made it 3-0, although Wolves scored through Sylvan Ebanks-Blake's shot on the turn.

It turned into a convincing victory for Palace, but Wolves were left regretting missing an early chance when midfielder David Davis charged forward and crashed a 20-yard shot against the crossbar.

Wolves were third in the Championship after a 1-0 win at Blackburn Rovers on 6 October.

However, a run of three wins, three draws and 10 defeats in their next 16 games has left Wolves 18th, only six points above the relegation zone.

But Zaha, who has been linked with a move to the Premier League in January's transfer window, was instrumental in Palace's attacks.

He skipped past a challenge from Stephen Ward and set up Moritz, who dragged a shot wide from eight yards.

Zaha also blasted over the crossbar after a one-two with Jonathan Parr and then had another effort cleared off the line.

However, Palace then took a deserved lead through Moritz's first free-kick from 20 yards out.

Bolasie added a close-range second before Moritz sealed the win with a second free-kick after he had been fouled by Roger Johnson.

Wolves, who have now only won three times in 16 matches, grabbed a late consolation when Ebanks-Blake finished from Jamie O'Hara's free-kick.

"The free-kicks summed up the day and I'm delighted for Andre.

"To do one either side shows fantastic ability but you don't get that good without practising.

"I had a chat with Andre in the week and hopefully he will get up to speed of playing in the English league. He didn't have a pre-season but has shown what he is capable of."

"We have to believe that we can turn it round but we are in a crisis, no doubt about it.

"We have lots of injuries but there are no excuses and we will see what we can do to improve. But the players who are here are the ones who must take responsibility.

"It's my duty to find out why and I won't blame anyone. We have to dig very deep and don't give any excuses - we are a bad Championship team."