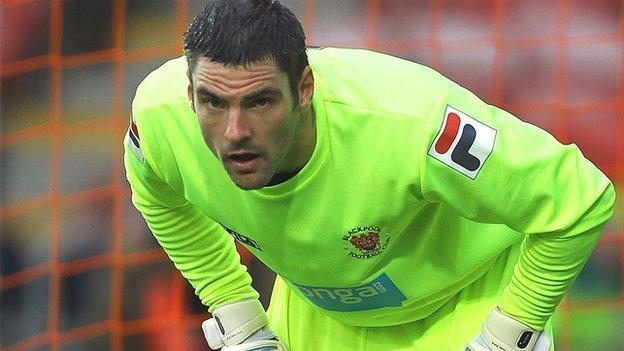 Blackpool and Hull City were forced to settle for a point from a dull Championship game with few chances.

And Tigers keeper Eldin Jakupovic did superbly to turn away a ferocious late 25-yard effort from Thomas Ince and then deny substitute Nathan Delfouneso.

Hull, who had won six of their last seven games, stay second in the table, seven points behind Cardiff.

Blackpool, for all their late pressure, have now won only one of their last six league games but both sides had struggled to create chances until the latter stages.

Meyler did drag an angled shot just wide for the visitors and striker Sone Aluko saw a long-range effort miss the target.

The entertainment improved slightly after the interval with Gilks making a smart save from substitute Jay Simpson 90 seconds after the restart and then keeping out Robbie Brady's 20-yard free-kick.

The best action came in the final stages, with the hosts looking the more likely to break the deadlock.

But despite both teams becoming slightly more adventurous, neither could find a way past the respective keepers.

Blackpool manager Michael Appleton said: "You have to see any point against Hull as a good result. We put in a solid performance and we had the better possession.

"We looked comfortable and getting a clean sheet is a big positive.

"Hopefully we will have three or four new faces in during the next couple of weeks to freshen things up."

Hull City manager Steve Bruce said: "I thought we were better in the second half and looked a bit more lively, but it is another point and who knows where it could take us.

"We keep getting the results and I can't fault our resilience but we had two good chances to win it.

"But the most important thing is that we secure who we have already got as we have put ourselves in a great position with 20 games to go."