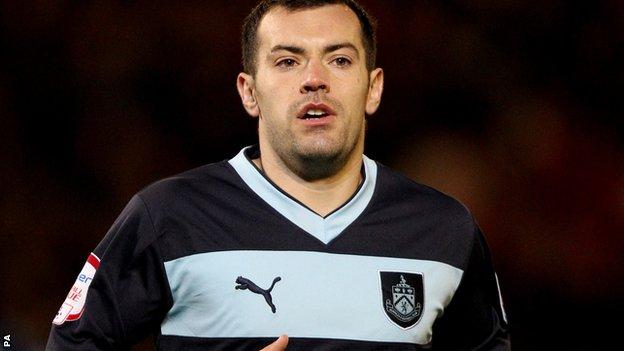 Sheffield Wednesday's good run of form came to an end with defeat by Burnley at Hillsborough.

The Owls are back in the Championship relegation zone despite claiming 10 points from their previous four games.

Burnley's Kieran Trippier hit the crossbar in the first half, before Keith Treacy's long-range shot gave the visitors the lead after the break.

Ross Wallace settled the contest from the penalty spot after Lewis Buxton had handled inside the area.

The Clarets are anchored in mid-table, four points away from the play-off places, while Wednesday have slipped back into the bottom three on goal difference.

Burnley were positive from the outset, despite the absence of injured leading scorer Charlie Austin, with right-back Trippier driving the ball against the bar from 30 yards after 11 minutes.

Kieran Lee forced Burnley goalkeeper Lee Grant into action with a diving header in a rare Wednesday attack, while Jason Shackell and Chris McCann went close for the visitors before half-time.

Lee and Michail Antonio were thwarted by excellent blocks from Michael Duff early in the second half before Burnley finally took the lead after 63 minutes.

Substitute Treacy's left-footed effort from 25 yards did not look to have too much threat but it squeezed inside Owls keeper Chris Kirkland's far post to put Sean Dyche's side ahead.

Wallace converted from the spot with 15 minutes remaining after Buxton had met a Treacy cross with his hand, and Treacy went close to adding a third goal when he drilled a shot against the post in stoppage time.

Wednesday manager Dave Jones: "We just seemed to lack a bit of a spark today and nobody seemed to get the game by the scruff of the neck. We were dropping too deep, I was screaming at them to squeeze the game."

Burnley manager Sean Dyche: "It was a very good away performance for any day. I thought the lads were very thorough in what they did."