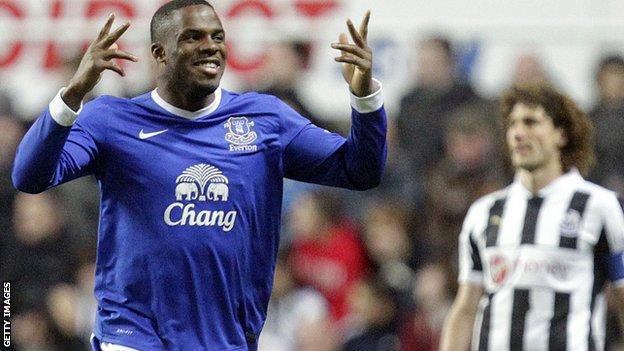 Substitute Victor Anichebe scored within 90 seconds of coming on to give Everton victory at Newcastle.

The hosts took the lead in the second minute of the game when Papiss Cisse capitalised on a Toffees defensive error to head home.

James Perch hit a post for the home side but Leighton Baines levelled with a stunning free-kick.

Transfer target Demba Ba was withdrawn from the Newcastle squad earlier in the day when Chelsea triggered a release clause in the striker's contract, but barely one minute was showing on the clock when the hosts took the lead.

Goalkeeper Tim Krul's free-kick floated towards the Everton defence and when Sylvain Distin and Johnny Heitinga collided, Cisse took the chance to nod the ball past Tim Howard.

Krul denied Baines with two good saves within seconds of each other, firstly to touch away a long-range free-kick and then bravely at the left-back's feet as he tried to scramble the ball in ahead of Jelavic.

Marouane Fellaini looked refreshed in his first match since completing a three-match suspension, and the Belgian saw a half-chance blocked by a well-timed tackle from Davide Santon but Newcastle went closer to scoring when James Perch headed against the post.

Everton have come from behind to claim 20 points in the Premier League this season, only Man Utd with 24 have more.

While the Toffees have conceded in 16 consecutive Premier League games, they have scored in each of the last 18, the best run in the Premier League this season and their best since 24 in a row in 1985-86.

But Everton equalised in spectacular fashion two minutes before half-time, Baines driving in a free kick from 30 yards that swerved past Krul's right hand after flying wide of the Newcastle wall.

Shola Ameobi, included after Ba was withdrawn from the squad, was inches away from retaking the lead for Newcastle five minutes into the second half, the striker doing well to bring down a chip from Vurnon Anita before seeing his shot roll just wide of Howard's left-hand post.

Manager David Moyes replaced Steven Naismith with Anichebe, and his decision quickly paid off in style as a move involving Steven Pienaar, Fellaini and Jelavic down Everton's left flank was smartly finished off by Anichebe from close range when he poked the ball home between Krul's legs.

Cisse was then thwarted twice in quick succession, Heitinga blocking a header before the Senegal international flicked the rebound at Howard while falling to the ground.

But Everton hung on for a win that lifts them to fifth place in the Premier League table, while Newcastle are two points above the relegation zone following their ninth defeat in 11 games.

Newcastle manager Alan Pardew: "We had a great start, I thought it was pretty even for long periods. They have a lot more experience and quality on the pitch than perhaps we did tonight.

"We had big players missing, but our effort was outstanding and I can't fault them for that, they gave everything.

"If we can get a bit more quality back in the team and maybe one or two in, which is probably important now, we'll be OK."

"I thought we played well, especially in the first half, I thought the second half got a bit harder but I was really pleased with the goals

"I'm pleased that we have finished this Christmas-New Year period with a decent amount of points."