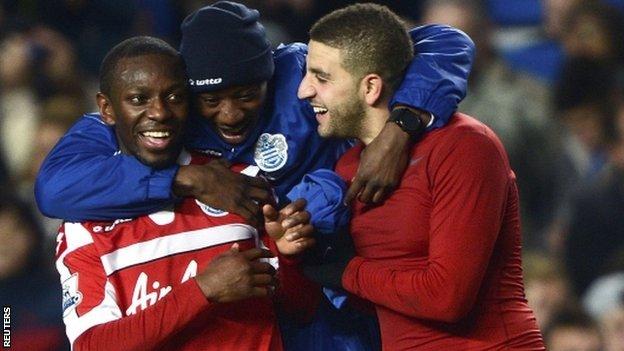 QPR snatched a stunning win over Chelsea at Stamford Bridge through a late Shaun Wright-Phillips strike.

The Premier League's bottom side shocked their in-form hosts when Wright-Phillips smashed home from the edge of the area after a corner.

Chelsea, chasing a fifth straight win, dominated throughout but could not break down QPR's packed defence.

Frank Lampard had a goal ruled out for offside and the Blues' best effort saw Julio Cesar deny Fernando Torres.

This was a far from vintage attacking display from Rafael Benitez's side, who put eight past Aston Villa in their last game on home turf.

QPR end long wait for derby win on the road

QPR's victory was their first in a Premier League London derby away from home since Les Ferdinand scored twice in a 3-1 win over Wimbledon in March 1995, with Ian Holloway getting Rangers' other goal that day.

It was also their first top-flight win at Stamford Bridge since March 1979, when Paul Goddard, Glenn Roeder and Martyn Busby scored in another 3-1 win. Both Rangers and Chelsea were relegated from the old First Division that season.

But what was looking like being a frustrating evening for the Blues turned into a disastrous one at the hands of one of their former players when Wright-Phillips delivered his sucker-punch, 12 minutes from time.

The former England winger did not sparkle on too many occasions in four years at Chelsea from 2005 to 2008, following his £21m move from Manchester City, and he has struggled to make too much of an impression with Rangers either.

Wright-Phillips' popularity around Loftus Road will soar after this goal, however. It came after he had been brought off the bench early on to replace the injured Junior Hoilett, and could prove invaluable to Harry Redknapp's side and their bid to stay up.

Things never looked straightforward for Chelsea, who may rue their decision to begin with Juan Mata and Eden Hazard on the bench after a defeat that deals a severe blow to their title hopes.

The Blues were lucky to keep 11 men on the pitch when Marko Marin marked his first league start by clattering into QPR midfielder Stephane Mbia with a wild lunge after just four minutes.

Fortunately for Marin, and for Chelsea, referee Lee Mason elected only to book the German international.

But things did not improve much for the home side, who rarely looked like breaking down a determined QPR backline in the first half.

Torres, who might soon face competition from Newcastle striker Demba Ba for his starting place, was starved of service as the visitors defended deep and in numbers.

Instead it was left to his team-mates to shoot from distance, and nothing summed up Chelsea's lethargic opening better than two horribly wayward efforts from defender Branislav Ivanovic.

QPR did not offer much at the other end but, with Adel Taarabt operating as their furthest man forward in a 4-5-1 formation, that was never their intention.

Instead they looked to soak up the home side's pressure, a tactic that worked so well that Cesar's first save came just before the break, when he stopped Oscar's deflected shot with an outstretched leg before Victor Moses fired over from the rebound.

Rangers had kept only one clean sheet in their last 26 top flight away games - and surrendered meekly against Liverpool three days ago - but they continued to keep Chelsea at bay in the second half.

Moses should have done better from a low Marin cross and Ivanovic headed over before Cesar kept out a Torres snap-shot after David Luiz's shot had been blocked.

Lampard thought he had drawn level with Kerry Dixon as Chelsea's second highest scorer when he did find the net from a corner, but his celebrations of what would have been his 193rd goal for the club were cut short by the linesman's flag.

By now, QPR had created a few half-chances too, but Wright-Phillips' goal still provided a twist in the tale that few had seen coming.

Taarabt teed him up on the edge of the area and he drilled a low strike past Ross Turnbull and into the bottom corner of the net.

QPR stay bottom, five points adrift of safety, but after three straight defeats, this win will give them renewed hope that survival is not beyond them.

Chelsea interim manager Rafael Benitez on his side's defeat, and his decision to rest several players:

"We were tired and weren't precise. We made a mistake and gave them their chance.

"I don't regret the changes because we can't carry on with the same players in every game.

"If you're playing a team at the bottom of the table at home, you have to trust your players and I trust them."

"They worked their socks off and they got their rewards, we deserved it and it was a fantastic performance.

"They have set the standard tonight and to get out of this mess they have to do it every week."